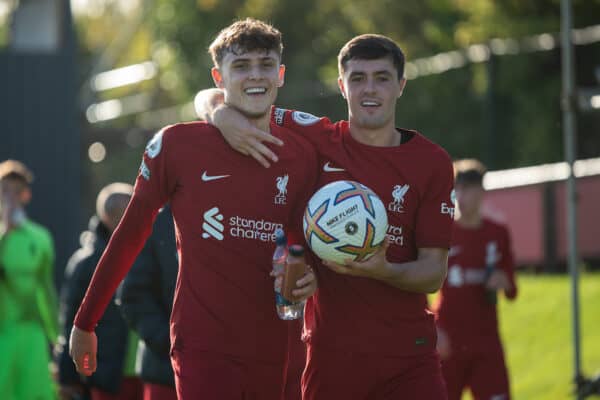 It was a striker’s showcase on Saturday, as Layton Stewart scored a hat-trick and Oakley Cannonier a brace as the Liverpool under-21s beat Wolves.

After a hard-fought 1-1 draw with Arsenal the weekend previous, the U21s were back in action at the AXA Training Centre with a strong side on show.

Calvin Ramsay had been half-expected to feature as he builds up his fitness – as was the case for Caoimhin Kelleher against the Gunners – but the Scot was absent, though Ben Doak stepped up from the under-18s to the bench.

It was a largely quiet first half as the two sides sized each other up, but Mateusz Musialowski was denied a spectacular opener as his dink over the goalkeeper was cleared off the line.

But Liverpool eventually broke the deadlock through Stewart, the striker latching onto Jake Cain‘s pass to fire low into the bottom corner for his fourth goal of the season.

The goal clearly fired Stewart up, with the 20-year-old in inspired form in the second half as he completed his hat-trick to make it six goals in nine games.

He had already gone close to a second as the game approached the 70th-minute mark, but made up for it soon after as he chested down Dominic Corness’ cross and hooked it in for 2-0.

His third of the afternoon was by far the best, capitalising on a poor clearance from the Wolves goalkeeper to lob a 40-yard strike into the back of the net.

There was time for an U21s debut for Doak, taking over from Musialowski in the closing stages, while Stewart’s replacement, Cannonier, swiftly made his mark.

The 18-year-old followed up a goal in the 4-1 thrashing of Rangers in midweek with two more off the bench in Kirkby – the second after brilliant work from Bobby Clark – as the young Reds strolled to victory.