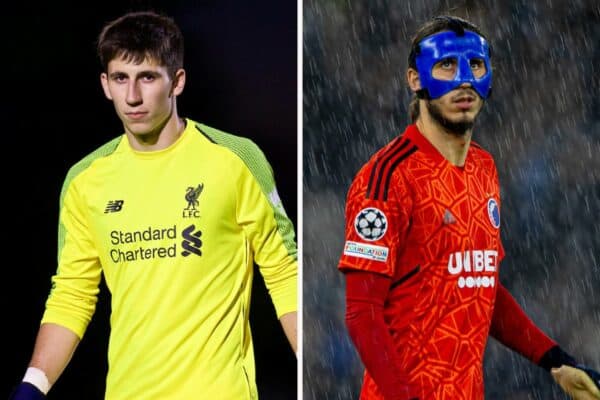 Man City were held to a 0-0 draw against FC Copenhagen in the Champions League on Tuesday, and it was a former Liverpool youngster who kept them at bay.

Goalkeeper Kamil Grabara was with the Reds for five years between 2016 and 2021, arriving from Ruch Chorzow for £250,000. He ventured out on loan to gain senior experience at Huddersfield in the Championship and twice with AGF Aarhus.

In July of last year, the Polish stopper left the club on a permanent basis to join FC Copenhagen for a fee in the region of £3 million, and it’s been a successful move for Grabara.

Last season, he helped lead the Danish outfit to the league title, playing 44 games in all competitions in his first season.

And Grabara has taken another step up in his development in 2022-23, featuring for Copenhagen in the Champions League.

A facial fracture kept him out of their opening two group games against Borussia Dortmund and Sevilla, but he has played both matches against Man City wearing a protective mask.

Despite conceding five goals on his Champions League debut against Pep Guardiola’s side at the Etihad last week, the City manager noted Grabara’s “incredible performance” on the night.

And in Copenhagen’s home meeting with the Premier League champions on Tuesday evening, Grabara saved a penalty from Riyad Mahrez and became the first goalkeeper to keep a clean sheet against City this season.

Aside from the penalty stop, he made a host of important saves on the night, in a game that saw City reduced to 10 men after Sergio Gomez’s first half sending off.

He was unable to keep out a rocket of an effort from Rodri, but after a VAR check, the goal was ruled out for another contentious handball decision.

Liverpool negotiated a 20 percent sell-on clause in the deal that saw Grabara join Copenhagen, which could prove lucrative in the future, with Grabara impressing in Denmark and now a full Poland international.

Grabara failed to make an appearance for the first team at Liverpool, but was named on the substitutes’ bench for the 2-1 defeat to Chelsea in the League Cup in 2018.

Great to see a Liverpool academy product performing on the big stage!