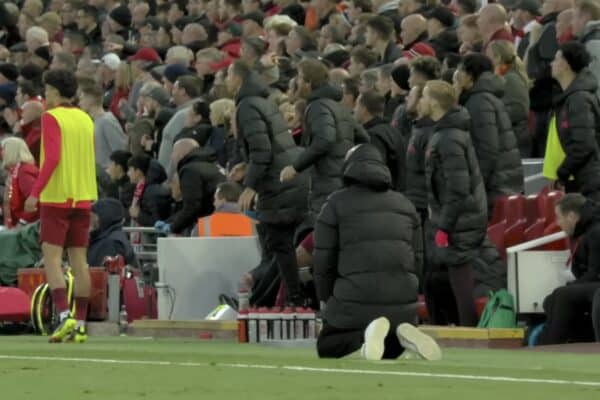 For Liverpool fans, it was a heart-in-mouth moment, but Pep Guardiola knew Mohamed Salah was about to score against Man City before it happened.

Salah had already raced through once in his new role as central striker, only to be denied by a brilliant Ederson save, when the chance presented itself again.

With Kevin De Bruyne sending a hopeless free-kick into the penalty area 75 minutes into Liverpool’s clash with Man City, Alisson leapt to catch it and immediately looked up.

A stunning pass saw Salah – who had been on the move before Alisson had even caught the ball – through in a battle with Joao Cancelo, turning the hapless full-back and into another one-on-one situation.

Unlike earlier in the tie, it was a composed finish from the No. 11, which was enough to secure three points for the Reds.

Those watching on from the stands, on their sofas and in the pubs, time stood still as Salah bore down on goal, with the finish allowing for a monumental sigh of relief before the celebrations began.

Who could doubt the Egyptian King, though? Clearly not Pep Guardiola!

In footage of the match-winning strike, with all angles shared by Liverpool after the game, the Man City manager can be seen slumping to his knees as soon as Salah broke loose from Cancelo.

Guardiola could only watch on helpless as the 30-year-old sent the ball home, his side undone by a straightforward counter-attack from goalkeeper to striker.

It was a route to goal analysts across the Premier League should have been aware of, with this latest effort very similar to the one Salah scored against Man United in 2020.

Alisson is now fourth in the Premier League‘s all-time charts for goalkeeper assists, with three, behind only Paul Robinson (five), Pepe Reina and David Seaman (four).

For goals and assists, only Robinson (six) sits above Liverpool’s No. 1 (four).