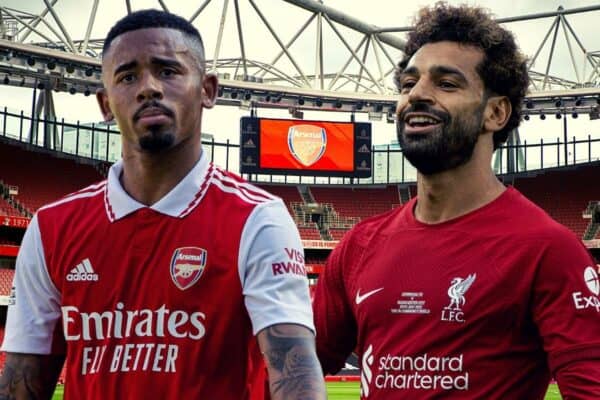 Liverpool face a huge test of their mettle on Sunday afternoon, with in-form Premier League leaders Arsenal eyeing a rare win over the Reds.

Jurgen Klopp‘s men may have beaten Rangers 2-0 in the Champions League in midweek, but there is still lots of work to be done domestically.

This weekend’s trip to Arsenal will be a far greater gauge of where Liverpool are at, as they face a Gunners side firing on all cylinders and brimming with confidence.

Victory for the Reds would feel like a big turning point.

With the game fast approaching, we spoke to Arsenal fan and writer Adam Clancy (@AdamClancy9) to get the lowdown on the Gunners, Liverpool’s dip in form and a look ahead to Sunday.

How delighted are you with Arsenal’s start to the season?

Extremely. We had a great pre-season, so hopes going into the season were fairly high, but to get 21 points out of a possible 24 is a very impressive start.

Some rival fans like to play down who we’ve played against, but the fact of the matter is you can only beat who is in front of you, and this league is the toughest in the world.

How influential a signing has Gabriel Jesus been?

He’s been as good as you could’ve asked for.

It’s never easy to settle into a new club, with new team-mates and surroundings, but Jesus looks like he’s been playing for us for 10 years.

It’s so refreshing to see a striker with as much energy as him, as although Pierre-Emerick Aubameyang and Alexandre Lacazette scored goals, they never brought the level of pressing and overall work rate Jesus has.

Five goals and three assists in eight Premier League games is a great tally to start the season – he’s contributing every game on average.

His work off the ball is incredible, too, so he has truly been a revelation.

With the Brazilians and ex-City team-mate Oleksandr Zinchenko there as well, he’s also forming strong relationships off the pitch.

Is a title challenge possible? Or is top four still the aim?

It’s easy to get carried away being top of the table and playing so well, but I think top four is still the aim.

Man City have shown that they’re still a force to overcome, and with Erling Haaland in this kind of form, added to their experience of lifting the title many times far more recently than us, it is an uphill task.

Liverpool have been poor by their standards so far, but it’s still very early doors, so I wouldn’t rule them going on another exceptional run later in the season either.

Just being in the conversation shows how far we’ve come, but top four and a trophy would still be an exceptional season.

As for Liverpool, what do you think has gone wrong?

I’ve seen a lot of analysis on their pressing stats, which seem to be much lower than usual.

It seems as if the team have lost a lot of energy, perhaps still hungover from competing on all four fronts last season.

Aside from that, most of the big-name players like Mo Salah, Trent Alexander-Arnold and Virgil van Dijk are not performing to the levels expected of them, and Klopp’s insistence to play a high line keeps costing them goals with players able to run in behind at free will.

I said at the start of the season second, but I think it could be lower now.

I still think Liverpool will get top four, though.

Which Reds player would you most like to see at Arsenal?

This is a weird one because he has been poor this season, but I’d take Trent.

Ben White has been brilliant at right-back for us, but he is a natural centre-back, and Trent is still the best in his position in the world for me.

If we want to reach the heights of City and Liverpool and really dominate games, we need two full-backs who can bomb forward and almost act as extra attackers when we have the ball, while still being solid at the back.

An honourable mention must go to Van Dijk – the best centre-back in the world in my opinion – but William Saliba, Gabriel and White are all very good options for us.

Salah is a phenomenon, too, but would limit minutes for Hale End star boy Bukayo Saka on the right wing.

Looking ahead to Sunday, what are the key tactical battles?

Games are usually won and lost in midfield, but I actually think the wings will be so important.

Trent is in poor form and has been questioned defensively and he will not want to play against Gabriel Martinelli, who won’t give him a moment’s rest.

If Andy Robertson is still injured, Saka, who’s starting to get back into form, will be a threat against second-choice Kostas Tsimikas on our other side.

Salah and Luis Diaz are world class, though, and if they both start and are in the mood, they can really hurt us.

A hopeful 3-1 to Arsenal, but honestly, it could be any score.

We are the form team, and so should be favourites at home, but Liverpool always carry a threat and have a good record against us lately.