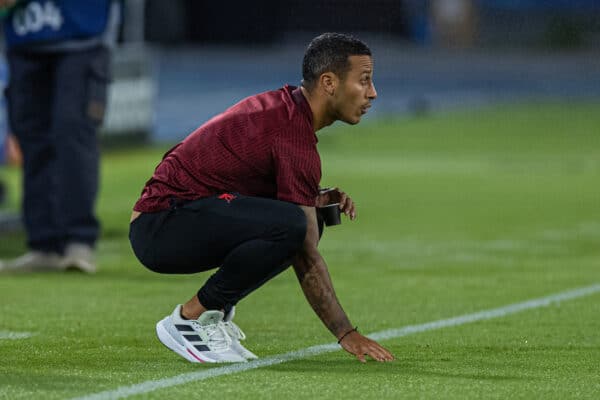 A 28-man squad were pictured working at the AXA Training Centre on Friday, with Thiago absent from the Liverpool group preparing for Arsenal.

The Reds will travel to north London later on Saturday, ahead of their Premier League clash at the Emirates on Sunday evening, looking to build on a 2-0 win over Rangers.

Jurgen Klopp deployed his side in a new 4-4-2 shape in the Champions League in midweek, and there is a chance he retains this system against the table-toppers.

The manager may well make changes, too, with another clash with Rangers to come on Wednesday night, and if the squad training on Friday is any indication, one of those could come in midfield.

Thiago was not part of the group put through their paces in Kirkby, though there is no confirmation yet that the Spaniard will be unavailable.

It remains a concern nonetheless, with Fabinho the likely stand-in if Thiago is not deemed fit to start.

Andy Robertson joined the warmup but is not expected to be part of the squad at Arsenal, while Arthur, Naby Keita and Alex Oxlade-Chamberlain remain sidelined.

Curtis Jones is back in full training, however, and there was a rare sighting of long-term absentee Kaide Gordon as the squad celebrated Trent Alexander-Arnold‘s 24th birthday.

Involved, too, were the academy trio of Stefan Bajcetic, Bobby Clark and Melkamu Frauendorf, who are firmly in the manager’s thoughts for the future.

They are more likely to be involved as the under-21s take on Wolves on Saturday afternoon, however, with the clash also providing Calvin Ramsay an opportunity to get minutes after his layoff.