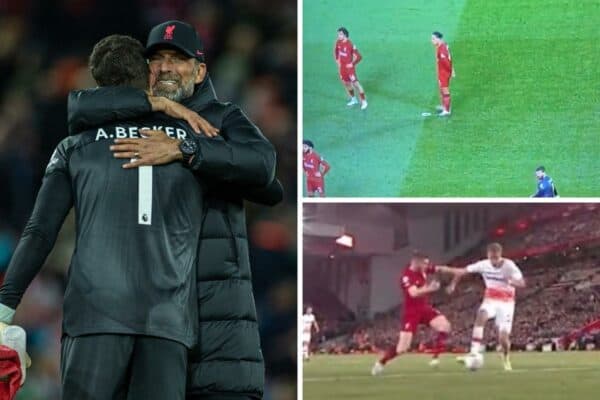 For the third game in a row, Liverpool were on the winning end of the scoreboard and the 1-0 victory against West Ham threw up some noteworthy moments.

Jurgen Klopp‘s side were buoyant heading into Wednesday’s match having dispatched Man City just three days earlier in a performance that put Liverpool back on track.

It continued at Anfield with Darwin Nunez scoring the winner, but Alisson also grabbed the headlines having denied Jarrod Bowen from the penalty spot.

The result continues to make the Premier League table more palatable to look at from a Liverpool perspective but there is still plenty of work to be done.

Before then, though, fans had plenty to talk about on social media after spotting some interesting flashpoints throughout the match…

Reds force another manager to their knees!

It was a satisfying moment to see Pep Guardiola drop to his knees when he realised what Mo Salah was about to do on Sunday in the win over City.

And the Reds saw another manager resort to the same thing just three days later, this time with a defensive action after James Milner and Alisson both denied Tomas Soucek late on.

It’s what Anfield will do to you…unlucky!

Moyes becomes the 2nd manager in 4 days to be brought to his knees. #LFC

Pep and Moyes on their knees in frustration at Anfield in a few days ?

James Milner to the rescue for Liverpool as the Hammers hunt for an equaliser ?#PLonPrime #LIVWHU pic.twitter.com/VrYaJ3IBws

As a side note, did you know Moyes has never, in 69 attempts, won an away game in the league against any of Liverpool, Arsenal, Chelsea and Man United.

It’s been an impressive few days for the Brazilian, first with yet another assist and then a penalty save and both times you could see what it meant to his teammates.

And the fans were not to be left out of it either, eulogising Ali every chance they got at Anfield:

Alisson accepts the acclaim of the Kop and gets a warm embrace from Klopp. Saved Liverpool’s bacon tonight. pic.twitter.com/AkYvhQ8Orm

And while we’re here, we can’t overlook these incredible stats – who ever said he couldn’t save a penalty?:

54% – Alisson has only conceded seven of the 13 penalties he has faced in the Premier League (54% – 2 saved, 4 off target), the lowest percentage of any goalkeeper to face at least ten spot-kicks in the competition. Expert. pic.twitter.com/DNYGSx6NmW

No goalkeeper to face 15+ pens in Europe's big-five leagues has a better ratio than that in this time. #LFC #LIVWHU

Where would Liverpool be without Ali? Not a pleasant thought to ponder really and, thankfully, we don’t have to!

James Milner has been at the brunt of frustrations for many so far this season, with the number of minutes and games he’s playing not what many had in mind for the 36-year-old.

But against the Hammers, he was brought on to do exactly what he was made for, throw his body on the line, take time off the clock and use his years of experience to get his team over the line.

And his “big toe” as Klopp put it, saved Liverpool:

Footballers aren’t made like James Milner anymore. What a mindset, what an athlete.

That little James Milner cameo was class man, such a smart footballer.

Experience that cannot be replaced.

“That’s how your cat feels”

Few have better wit than Scousers and Kurt Zouma was on the receiving end after requiring treatment in front of the Kop.

His actions of abusing his cat are no laughing matter and it’s great to see football fans refuse to let him forget it, singing, “That’s how your cat feels” after going down in the penalty box:

Kurt Zouma goes down injured. "That's how your cat feels" chants The Kop.

Van Dijk and the penalty spot

From the title alone you just know rival fans are all over it, calling Van Dijk every name under the sun for a tactic that nearly every team uses when they’ve conceded a penalty.

Scuffing the penalty spot is a bit of an overstretch for his movement but the use of some dark arts was appreciated by Reds, it’s not something Liverpool have been known for:

So much time from this. Nice to see the reds be horrible again ? https://t.co/H9yMNscXQR

To be honest, Virgil van Dijk gives the penalty spot a little stamp to even it out and make it perfect. He’s thinking:”Bowen lad, you’re up against the best goalkeeper in the world, so it’s only fair to actually give you a chance” ???? pic.twitter.com/LQUo5xFzR1

My respect for Van Dijk went up a level last night if he did indeed deliberately scuff the spot. This is what you want players in your team to do – find any and every way they can to gain an advantage and inconvenience and obstruct opponents. https://t.co/dnwnxGgyuS

It’s hilarious how some get so triggered by every little thing Liverpool do.