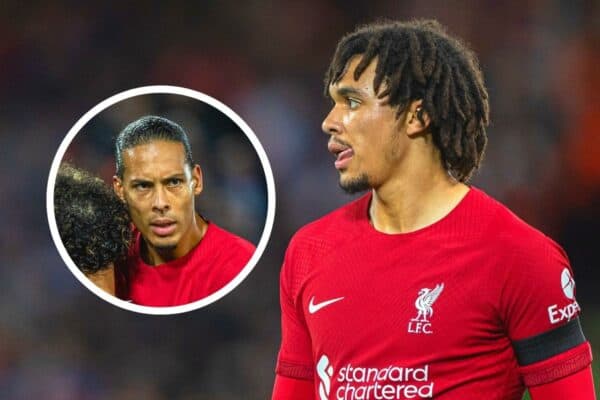 Virgil van Dijk has not hidden his distaste for how the English media builds a player up only to drop them into a freefall, as Trent Alexander-Arnold continues to attract headlines.

Liverpool’s No. 66 has been front and centre in recent weeks after not playing a single minute for Gareth Southgate’s England, despite being called up, and seeing his defending come into question.

The 23-year-old offered a well-timed response against Rangers, opening the scoring and offering a more resolute defensive pillar for what was only Liverpool’s third clean sheet of the season.

It’s one small step for Alexander-Arnold but a start nonetheless and in a number of interviews post-match Van Dijk was asked about his teammate, and he didn’t hold back on how the English media are so quick to vilify.

“That’s the outside world, the criticism we all get could’ve happened but for him, he had to just keep his head down,” Van Dijk said of Alexander-Arnold to LFCTV.

“In my opinion, that’s how the English media works. They can be very hard and not think about the player and their wellbeing and all this stuff.

“He showed today his quality again and defensively was there as well and hopefully we can keep that going – all of us and keep clean sheets.”

The Dutchman doubled down on his words pertaining to the media’s treatment of players in the UK when talking to Sky Sports, and praised not only Alexander-Arnold but the whole team for showing a reaction on the pitch.

“I’ve been in the UK now for almost eight, nine years and everyone here is good to praise a player, very high up, up to the sky and let them fall as hard as they can,” Van Dijk lambasted.

“That’s what we as players have to deal with and we forget about the wellbeing of players and everyone is then talking about how we should all accept it.

“For him to just carry on and work, not only him but can mention other players as well, but for him to deal with it and show a reaction today is what we need, all of us.

“To do that, it’s important we back him, the manager, the club and the fans.”