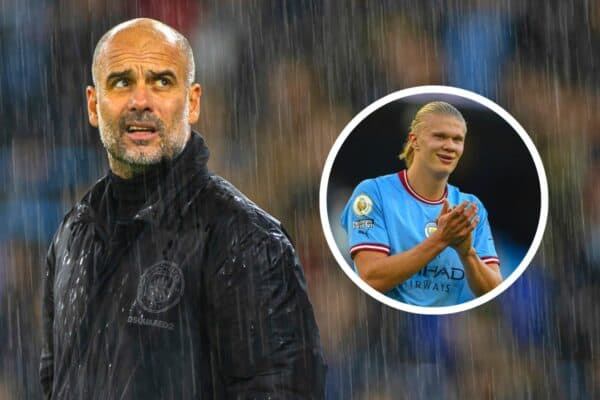 Erling Haaland did not feature for Man City in their Champions League draw with FC Copenhagen on Tuesday, with Pep Guardiola coy on the fitness of his striker and two other key players ahead of Sunday’s clash with Liverpool.

After a Sergio Gomez sending off saw them reduced to 10 men in the first half, City were unable to find a way past former Liverpool goalkeeper Kamil Grabara.

Haaland, who has scored a whopping 20 goals in his first 13 matches for City, was named on the bench, but didn’t come on despite his side’s failed attempts to make a breakthrough.

With Guardiola’s side already on the verge of qualification for the knockout stages, the Spaniard didn’t want to take any risks with players who were carrying niggles.

The City boss claims Haaland was not feeling 100% after starring in their win over Southampton on Saturday.

“He finished the game against Southampton so, so tired and he didn’t recover well these two or three days, Guardiola said in his post-match press conference.

“Yesterday was not good, a little bit better but not perfect and that’s why we decided to not take a risk.”

Haaland isn’t the only player Guardiola cast some doubt over, claiming Phil Foden and Bernardo Silva were also injury worries ahead of the Copenhagen clash.

Both came off the bench in the second half, and should be expected to start at Anfield on Sunday.

“Many players didn’t start today because they were exhausted and tired and fatigued and had some niggles,” he continued.

“Erling didn’t feel really good after the game against Southampton, Phil had some disturbing problems, Bernardo told us yesterday he was so tired.”

When pressed on whether Haaland will be fit to face Liverpool, Guardiola told TV2:

“We will have to see tomorrow, I hope he will be ready.”

Heard that one before!

After the victory over Southampton, Guardiola described taking on Liverpool at Anfield as “the biggest test we can face in England,” despite the Reds’ recent struggle for form.

Don’t be fooled, any potential injury problems will miraculously have disappeared by the time City arrive on Merseyside this weekend!