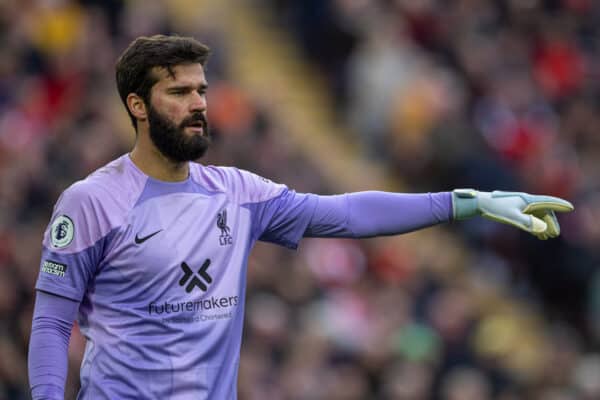 Alisson recorded his third Premier League assist in Sunday’s 1-0 win over Man City, with only one goalkeeper contributing to more goals since 1992.

A raking pass from Alisson, 75 minutes into the clash at Anfield, set Mohamed Salah through on a blistering counter-attack and on his way to a match-winner.

It was a trademark moment from the pair, often stationed furthest away from each other on the pitch, with echoes of their combination against Man United two years previous.

And it marked the third time Alisson has assisted a goal in the Premier League.

Since the founding of the current English top flight in 1992, only eight goalkeepers have laid on three or more goals for their team-mates.

In the past 30 years, only three – Paul Robinson (five), Pepe Reina (four) and David Seaman (four) – have assisted more times than Alisson, who is level with Mark Crossley, Tim Howard, Jussi Jaaskelainen and Peter Schmeichel.

Forty goalkeepers have set up at least one goal, with 25 of those doing so more than once.

Only four have both scored and assisted, including Alisson, who famously clinched a 2-1 win at West Brom in 2021.

That brings the Brazilian’s tally of goals and assists in the Premier League to four, equal to Reina, Seaman, Schmeichel and Howard.

In fact, the only goalkeeper in the history of the Premier League to directly contribute to more goals is Robinson, who scored one and assisted five throughout his time with Leeds, Tottenham, Blackburn and Burnley.

Alisson is contracted to Liverpool until 2027, with there a very real possibility of the 30-year-old levelling or even improving on Robinson’s unique distinction.

The other two goalkeepers to score once but not assist a single goal are Brad Friedel and Asmir Begovic, though the latter is still active as Everton‘s backup.

“Ali on the ball is unbelievable and you have to trust him in those moments,” Andy Robertson enthused after Sunday’s win.

“It came from their corner or free-kick and Ali has got it in his hands and you trust him to make the right decisions.

“It’s something we trust Ali with, he’s unbelievable with the ball at his feet.

“He’s got great vision as well and when he sees something, then we have to react off it and we all pushed up and luckily the ball has ended up in the back of the net.

“I think Ali’s the best in the world for sure in what he does.”