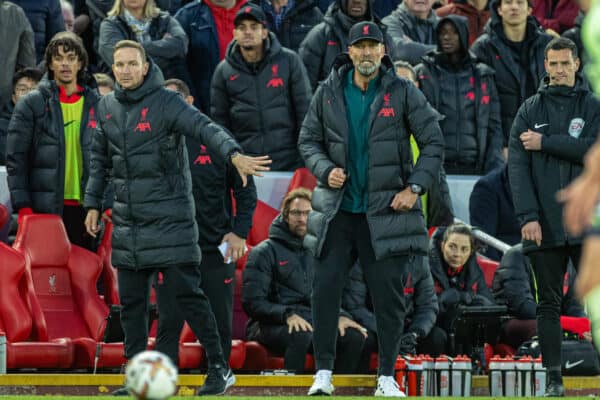 Will Jurgen Klopp be on the touchline vs. West Ham?

Jurgen Klopp was formally charged by the FA on Tuesday following his sending off against Man City, but will he be on the touchline for Liverpool’s match against West Ham?

The Reds meet the Hammers on Wednesday evening, just three days after a dramatic 1-0 win over Man City that has since been shrouded in controversy.

And the Liverpool manager is expected to be on the touchline for the occasion despite the FA announcing that he has been charged “with a breach of FA Rule E3” after “improper” behaviour on the touchline.

He has until Friday to respond to the charge and, therefore, will be allowed to take his place in Liverpool’s dugout on Wednesday – as reported by the BBC.

Klopp swiftly apologised for his actions after getting in the face of the linesman after a foul on Mohamed Salah was overlooked late into Sunday’s win.

“Of course, red card, my fault. I went over the top in the moment,” he said after the match.

“I don’t think I was disrespectful to anybody, but when you look at the pictures back, I know myself, at 55 years, the way I look in these moments is already worth a red card – who cares what I say.”

It is the first red card Klopp has received as manager of Liverpool.

What about the trip to Forest?

The standard charge in events such as these is a one-match ban and a fine and this could come into effect for the next match after the visit of West Ham.

Which is against Nottingham Forest in the early Saturday kickoff (12.30pm).

Klopp has until Friday to respond to the charge and it will then be a case of waiting to see what the disciplinary action will be and when it comes into effect.

There is every chance that the manager is issued a one-match ban for his actions, having accepted he was in the wrong, and Forest could be the fixture he serves it.

If not, then Liverpool’s next domestic match is against Leeds on October 29.

It’s a waiting game but This Is Anfield will keep you informed of any updates.