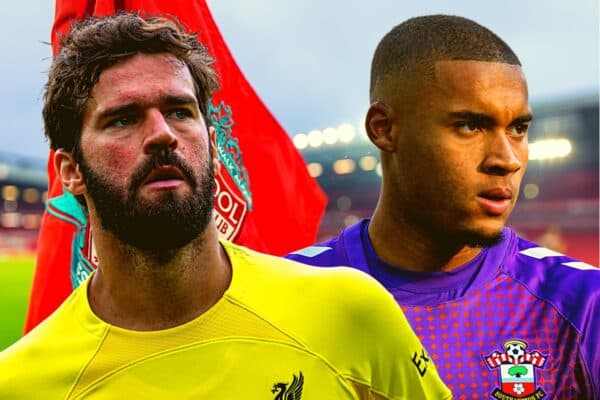 Liverpool host Southampton in their final game before the World Cup, as they look to avoid a new manager bounce working against them.

After Carabao Cup progress past Derby on Wednesday night, focus returns to the Premier League this weekend.

Jurgen Klopp‘s men will be looking to take some momentum into the break after the win at Tottenham last Sunday, ahead of a more fruitful second half of the season.

Here are 10 key things to know ahead of Liverpool’s must-win game.

As Liverpool prepare for their final game before the World Cup, it was confirmed that Klopp will be forced to sit the Southampton clash out after receiving a one-match suspension from the FA.

It comes after a successful appeal over his red card in the 1-0 win over Man City in October, having initially been fined £30,000.

Pepijn Lijnders will instead be in the dugout on Saturday – the next time we see Klopp will be in Dubai!

2. Southampton have a new boss

A 4-1 drubbing at the hands of Newcastle proved to be the final straw for Ralph Hasenhuttl, who was relieved of his duties after nearly four years in charge.

In his place is Nathan Jones, who arrives from Championship side Luton, having performed expertly there on a tight budget, reaching the playoffs last season.

A spiky character known for adopting a high-octane style of play, it will be intriguing to see how Jones fares in his first Premier League match in charge.

New bosses are famed for enjoying a bounce early in their tenure – it would be indicative of Liverpool’s season to see Southampton perform like Pep Guardiola’s Barcelona all of a sudden!

Southampton have no new injury problems going into their trip to Anfield, so Jones could field a similar team to Hasenhuttl’s last XI in charge.

James Ward-Prowse is a certainty to start and will be stinging from his England World Cup omission – his set-piece prowess is something to be wary of.

Valentino Livramento and Kyle Walker-Peters are both definitely out injured, while Juan Larios is a doubt.

Veteran attacker Theo Walcott could lead the line for the visitors and top scorer Che Adams is also expected to join him in attack.

Naby Keita, Arthur, Luis Diaz and Diogo Jota all remain absent for Liverpool – hopefully, two of those will be back after the World Cup.

Klopp has confirmed that Keita and Diaz are both running outside again as they work on their recovery, which is a huge positive.

Meanwhile, Joel Matip is back in training after overcoming a calf problem and James Milner is also available again.

If injuries can be avoided in the second half of the season, there is no reason why Liverpool can’t hit a formidable run of form.

After making 11 changes in the League Cup in midweek, Klopp could do the same again on Saturday, fielding his strongest available XI.

Ibrahima Konate will return to partner Virgil van Dijk at the back, while Harvey Elliott could continue to keep out Jordan Henderson in midfield.

In attack, the trio of Mohamed Salah, Darwin Nunez and Roberto Firmino are likely to start, although Curtis Jones is a potential option in a left-sided role.

Nunez shone on the left in tandem with Andy Robertson at Spurs, though, so it would be a surprise to see the Uruguayan omitted.

Addressing the media on Friday, Klopp discussed the situation surrounding FSG and possible new investment, stressing that he is fully behind it:

“I’m very positive about the whole thing. Either way it will be fine. I have a really close relationship with the owners.

“Now we have to see what we do. Nothing is decided with what we do in the winter. We have time until then. We follow the market all the time, every day.

“No player scores a goal in the world without us knowing.”

Southampton make the trip to Anfield well aware that it hasn’t been a happy hunting ground for them of late.

Then again, that almost applies to everyone over the past four or five years!

Liverpool have won the last five meetings between the pair on Merseyside, with the 16-0 aggregate score highlighting their dominance.

That being said, Saints did draw 0-0 at Anfield in 2017 and won 1-0 in the League Cup semi-final earlier that year, so they have known how to get a positive result there during Klopp’s tenure.

Konate was outstanding in the 2-1 victory at Spurs and his return to the team has made a noticeable difference in recent weeks.

In fact, the Frenchman still hasn’t tasted defeat in the league in a Liverpool shirt when he has started, spanning 12 matches.

On top of that, Konate hasn’t been beaten at home in any competition, showing what a dominant and influential figure he is.

Matip is superb in his own right, and Joe Gomez has clear qualities, but the 23-year-old is Van Dijk’s first-choice partner now.

Simon Hooper has been confirmed as the referee for the weekend action, and he takes charge of his first Liverpool game in the Premier League.

Over those two games, Hooper only showed one yellow card to Liverpool – a booking for Yasser Larouci at Shrewsbury.

Saturday’s game is a 3pm kickoff, which means it is not on TV in then UK.

That means TIA’s matchday live blog is the best place to follow the action, with Sam Millne keeping you company from 2.15pm.