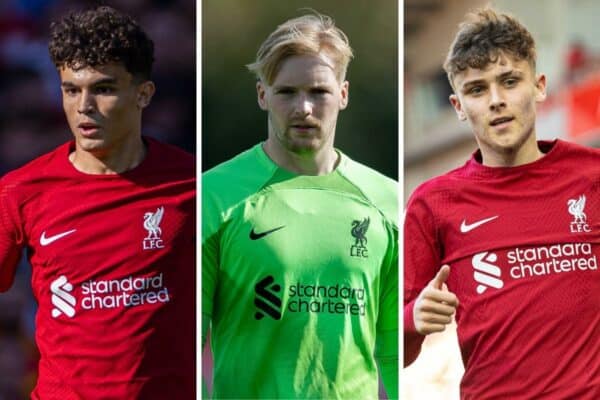 7 Liverpool players who are in line to start vs. Derby

Liverpool take on a struggling Derby side in the Carabao Cup third round on Wednesday night, with a number of players set for rare first-team starts.

This week brings a long-awaited break from Premier League and Champions League fixtures every three days, which has undoubtedly stretched Jurgen Klopp‘s squad to its limit.

Instead, there comes the first tie in their defence of the Carabao Cup, with League One side Derby visiting Anfield.

Derby, who sit seventh in the third tier, suffered a late collapse away to non-league Torquay at the weekend, drawing 2-2 to guarantee an FA Cup first-round replay for the Devonshire club.

Klopp will be eager for his side to not underestimate their opponents, but it is difficult to argue that this will be a tougher test than back-to-back clashes with Napoli and Tottenham.

With one eye on the weekend’s clash with managerless Southampton, before a long pause due to the World Cup, wholesale changes can be expected on Wednesday.

Here are seven players who are likely to come into the side.

Backup goalkeeper at an elite club offers little opportunity for minutes on the pitch, and that is certainly the case for those battling injury.

A groin issue detected on the first day of pre-season kept Kelleher out for three months, and since then the Irishman has only played 90 minutes of football, that being for the under-21s in a 1-1 draw with Arsenal.

Last season, Kelleher was a hero in the domestic cups, and with Alisson in line for a rest, he can set his sights on doing the same this time around.

With 45 minutes in the U21s’ 3-1 win over Fulham on Sunday, Phillips all but confirmed his involvement in the Carabao Cup as he got valuable minutes in his legs.

Having not taken to the field since another academy outing in mid-September, the 25-year-old was able to shake off the cobwebs before an almost certain start against Derby.

It comes with Joel Matip still sidelined, and could allow Virgil van Dijk his first night off all season, having played every minute of every game so far.

After a gradual buildup of minutes with the U21s, Ramsay finally made his senior Liverpool debut as a late substitute in the 2-1 victory over Napoli in the Champions League.

It came after two goals in three games at academy level, and should precede a logical full debut against Football League opposition in the Carabao Cup.

With James Milner still following concussion protocol and Joe Gomez likely needed at centre-back, Ramsay can stand in for Trent Alexander-Arnold while being given a chance to impress.

It was in the same round of the Carabao Cup last season that Klopp handed full debuts to Kaide Gordon and Conor Bradley, as two of the outstanding talents in the youth setup.

That came after regular training with the first team, and 18-year-old Bajcetic is now set for a similar breakthrough after glimpses of his potential in substitute outings against Bournemouth, Ajax and Napoli.

There are high hopes for Bajcetic within Klopp’s staff, and he could take a big step forward if he’s given a shot in the No. 6 role as Fabinho sits out.

Like Bajcetic, Clark has been on the fringes of the first team throughout the campaign so far, though the competition for places in his role has brought fewer chances on matchdays.

Instead, he has been allowed to maintain rhythm and form in the academy, and the 17-year-old has arguably been the standout, most consistent performer in his 14 appearances.

Clark can operate in a number of roles but is most likely to be trusted on the left wing against Derby.

It has been a stop-start season for Carvalho so far, with the Portuguese showing glimpses of his talent but as yet struggling to truly impose himself.

The step up may take longer than some anticipated, but there should be no concern over the 20-year-old’s adjustment as, in all likelihood, he would have played even less by now were it not for widespread injuries.

Having dominated in the Championship, though, a meeting with League One opposition could be the perfect platform for him to push on, potentially starting up front.

While the majority of those mentioned above are youth prospects being given a valuable opportunity to catch the eye, for Oxlade-Chamberlain, it will be another milestone on the road to full fitness.

The 29-year-old has come off the bench against Nottingham Forest and Tottenham in his only minutes since a hamstring injury picked up in pre-season, but this should be his first start back.

He could be tasked with filling the centre-forward role, as he did in both of those cameos in the Premier League, but there may be more sense in easing him back in on the right wing.