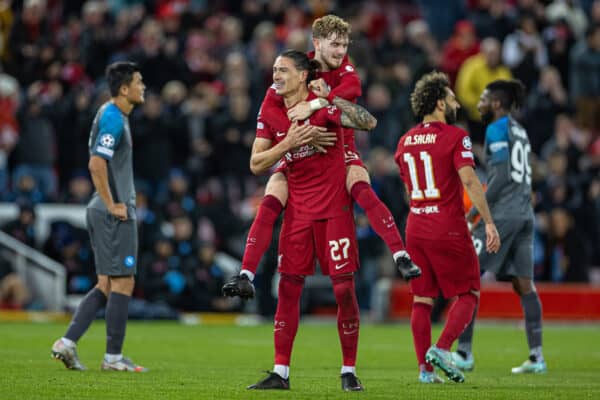 For an evening that had very little riding on it, Tuesday night took a simmering start and eventually delivered something that edged toward a vague sense of boiling point.

Serie A leaders aren’t what they used to be, but it is undeniably a league that is enjoying a gradual renaissance; unbeaten Napoli arrived at Anfield not only harbouring a five-point lead at the top of their domestic championship, but they were also in possession of a 100 percent Champions League record.

Having taken to the field for 17 elite games of football so far this season, Napoli had scored an impressive 50 goals, four of them past Liverpool in Naples, plus an aggregate of ten against Ajax, six of which were in Amsterdam.

Within this run, domestically, they had won away to the defending champions, AC Milan, and twice in Rome.

After a cluster of years of showing their potential, only to fade away, the opening third of the 2022/23 season has seen Napoli issue what appears to be a genuine statement of intent.

On the back of a 21-game unbeaten run, dating back to last season, they came to Anfield with nothing to prove to anyone, other than themselves.

They started boldly, but then the weight of their surroundings began to sit heavily on their subconscious for a while. As far as dead rubbers go, it meant something tangible to all involved. Essentially ego was at play.

While Napoli were embracing the game as a test of just how good they are in their role as Europe’s most in-form team, for Liverpool it was a case of reaffirmation that they aren’t as bad as they were being told they were.

Narrow margins of error, the geometry of VAR and goal-line technology was a decisive factor in this one, but Liverpool’s determination to get a positive result over the finish line was crucial too, on an evening where cruising would have been completely understandable.

Jurgen Klopp wanted his team to be harder to play against than they had been in those defeats against Nottingham Forest and Leeds, and they succeeded in this. The trick now is to take that concept to north London on Sunday and implement it against what should be an upbeat Tottenham.

There are still no guarantees that they will do that, however, as Antonio Conte is more than adept at making his teams horrible to play against. Sunday is just as likely to be a war of attrition as it is a work of footballing art, just at a time when you can’t be sure if Liverpool can be the master of either.

One step forward, now for another

Another shift in formation took us back to 4-3-3 against Napoli, with Curtis Jones revelling in being handed the left-hand side of the front three. As well as he did, when everyone is fit again, he is never going to consistently challenge for the same position, but right now he can offer a bit of much-needed balance, all the while giving Klopp the task of finding a way of harnessing him to the team more often.

Jones is unnecessarily polarising among the Liverpool fanbase. I get the frustration that he hasn’t kicked on as much as expected so far, but for a club that is crying out for something a bit different in midfield, here is a readymade option.

He is calm on the ball, capable of working his way out of tight positions, possesses plenty of skill, and has an eye for the esoteric. The lessons he must be picking up from Thiago on the training ground will be invaluable. Some supporters have already made their minds up about him, however, and are unlikely to be swayed.

There were other positives; Darwin Nunez made a nuisance of himself once again when thrown on as a substitute, hurtling into perilous situations and rubbing up other players the wrong way, inclusive of Virgil van Dijk it seemed, when plundering Liverpool’s second goal of the night, just as it might have sneaked over the goal line anyway for our No. 4.

The big mad Uruguayan is definitely the type that will take the last chocolate biscuit without offering it around first, only to leave the empty wrapper in the cupboard for good measure. He remains an increasingly loveable exasperation.

Added to this, Ibrahima Konate played like a man making up for lost time, Mo Salah plundered another goal, and it was good to catch the first sighting of Calvin Ramsay for a few minutes, with him even getting involved in a decent late move. Kostas Tsimikas put in a fine shift too.

This was a standalone endeavour to a large degree, but Liverpool will take plenty of good vibes from the win. While last season was all about chasing the ultimately unfulfilled dream of a quadruple, Liverpool are now back to partitioning competitions.

In the Premier League, no avenue of misadventure appears to be safe, but in the Champions League, Liverpool have stealthily won five on the bounce since Naples, Salah scoring in all of them.

Across those five games, we’ve scored 16 goals, conceding only twice, and keeping three clean sheets. Of the five games Liverpool and Napoli each won in Group A, in the end, there hasn’t been much to split them, at least statistically.

Given that Klopp will turn to as many periphery figures as possible for the League Cup, there is the prospect of those old borders being penned back in again to split the missions. Given our wider situation, he would be mad not to.

Three and a half months now separate Liverpool from their next Champions League fixture, and the hope can only be that they are in an infinitely more overall consistent frame of mind by then, enhanced by the return of some key elements from the injury list.

Tuesday night represented a step forward. Sunday will present us with the opportunity to take another.