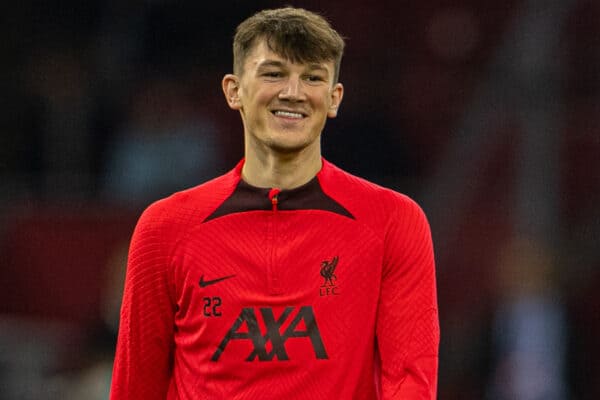 Liverpool right-back Calvin Ramsay has been called up to Scotland’s senior squad for the first time ahead of their friendly against Turkey later this month.

The 19-year-old was finally able to make his full Reds debut against Napoli last week, with injuries hampering the first few months of his time at the club.

Having arrived from Aberdeen for a fee around £6.5 million in June, a back injury was discovered on Ramsay’s first day of pre-season preparations at the AXA Training Centre.

However, the right-back was able to return to full training last month, and after building up fitness by playing three matches for Liverpool’s under-21s, he came off the bench for his first team debut against the Serie A outfit last Tuesday.

Now, Ramsay has been given an opportunity to impress as part of Steve Clarke’s senior Scotland squad who, having not qualified for the World Cup, are due to play Turkey in Diyarbakir next Wednesday.

??????? Steve Clarke has named his Scotland squad for our upcoming friendly against Türkiye.

The Reds’ League Cup meeting with Derby on Wednesday is expected to see Ramsay make his first start for the club, with Jurgen Klopp likely to make wholesale changes against Paul Warne’s side.

Klopp recently expressed his excitement at Ramsay’s return to fitness, claiming “the sky is the limit” for the young right-back.

“He’s an outstanding talent,” Klopp said prior to Liverpool’s draw with Brighton earlier this season.

“We scouted him. I saw a lot of games from him. He did exceptionally well. He’s a real player, he’s really involved in everything. A real talent. I’m excited about him.

“Then he arrived here and he had the issue with his back and since then, he was out.

“I saw him now two or three times in training, but it’s the first few sessions. Now we know much more about him as a boy, outstanding, well-educated, friendly, confident – a really good boy.

“And now we start working. How it is for all of them in that age group, the sky is the limit so I have no idea where it can go for him.”

Could Scotland have a Liverpool full-back pairing for the years to come? It’s certainly possible. Well in, Calvin!