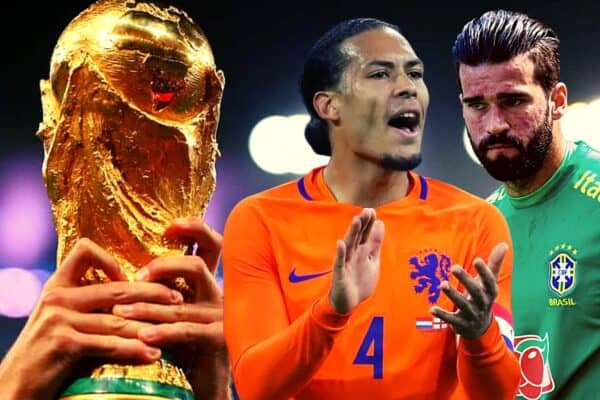 Complete guide to the 2022 World Cup – from a Liverpool perspective

The 2022 World Cup kicks off on Sunday, November 20, with seven Liverpool players involved. Here is everything you need to know as a Reds supporter.

Held in Qatar, under hugely controversial circumstances, the World Cup is taking place in the winter for the first time in its history.

That means a break for Liverpool, with their Premier League, Champions League, FA Cup and Carabao Cup efforts on pause until mid-December.

For some, it will be a welcome distraction; for others, a waste of time before the real football gets back underway.

But what do we need to know about the 2022 World Cup from a Liverpool perspective? Here’s our complete guide.

Which Liverpool players are involved?

There are seven Liverpool players at the World Cup in total:

And who missed out?

A host of Liverpool players missed out on the World Cup for various reasons.

Diogo Jota would have been part of the Portugal squad if not for a serious injury, while Thiago was overlooked by Spain manager Luis Enrique and so too Roberto Firmino with Brazil.

Similarly, Joe Gomez, Harvey Elliott and Alex Oxlade-Chamberlain were among those simply not called up by England’s Gareth Southgate.

Mohamed Salah, Andy Robertson, Luis Diaz, Naby Keita and Kostas Tsimikas did not qualify with their countries, while both Joel Matip and James Milner are retired.

What are Liverpool doing during the World Cup?

For the players not involved in Qatar, the tournament allows for a short break before Jurgen Klopp takes his squad to Dubai for a warm-weather training camp.

Liverpool will stay in the UAE for almost two weeks, with training sessions in elite facilities sandwiching friendlies against Lyon (Dec 11) and AC Milan (Dec 16).

They then return to Merseyside, with the first game back after the World Cup coming at Man City in the Carabao Cup fourth round (Dec 22).

FRANCE vs. Australia – 7pm, BBC One

* Channel to be confirmed.