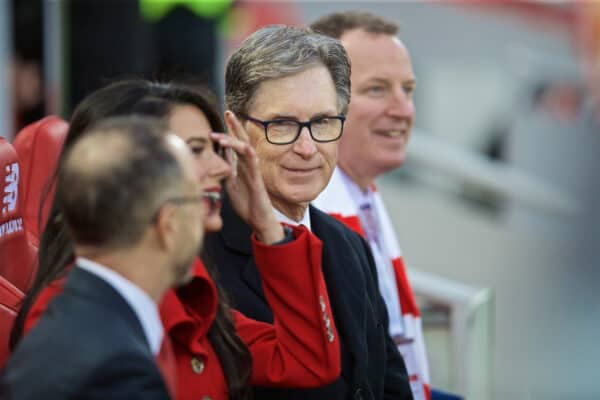 For the first time since the news that Fenway Sports Group are seeking investment into Liverpool, an inside source has confirmed “a lot of interest.”

FSG are currently exploring their options when it comes to Liverpool, employing the services of financial companies to find investors and weigh up a possible sale.

There is a real prospect of FSG selling the club entirely, with president Mike Gordon stepping back from his day-to-day duties to focus on identifying a potential buyer.

And while he insists it is “early days” in the process, FSG partner Sam Kennedy has told the Boston Globe that there has already been “a lot of interest.”

According to the Globe, which is owned by John W. Henry, Kennedy is currently holding regular meetings with Liverpool owners Henry and Tom Werner in New York City.

“There has been a lot of interest from numerous potential partners considering investment into the club,” he said, with both outright buyers and minority investors coming forward.

As it stands, Kennedy describes the situation as “exploring possibilities,” but interestingly, he also indicated a stakeholder blend could be the most likely avenue.

That would involve a gradual transition in ownership, with a minority investor increasing their stake in the club over time until they take majority control.

It is certainly not out of the question for this to occur, particularly given suggestions that FSG would not simply sell to any buyer willing to stump up the £3 billion-plus to secure the sale of Liverpool.

The belief is that another American investor is most likely, with a state-funded buyer – such as those who own Man City, Newcastle and Paris Saint-Germain – effectively ruled out.

“One way to increase that value from time to time is to sell assets or add investors.

“Does that mean FSG is going to sell Liverpool? I do not know.

“It’s John Henry’s, Tom Werner’s and Mike Gordon’s job to responsibly run Fenway Sports Group and they felt this was an ideal time to explore possible opportunities for investment into the club.”