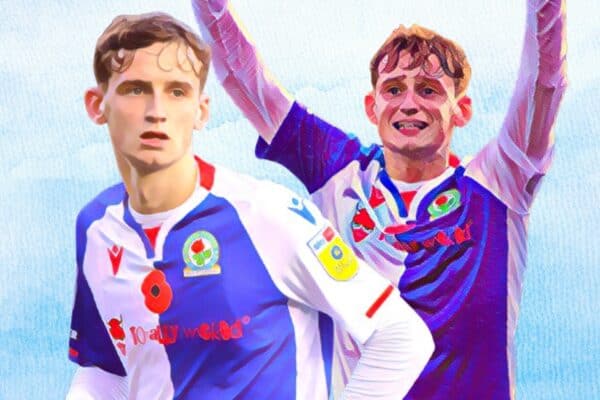 Tyler Morton has enjoyed success after leaving Liverpool for a loan spell at Blackburn, and is “becoming an integral cog” in the Championship.

In a campaign that saw him celebrate his 20th birthday, Morton has headed out for his first taste of regular first-team football at Ewood Park.

Following in the footsteps of Harvey Elliott and Leighton Clarkson, the young midfielder looks to be closer to the former than the latter in terms of his success with Blackburn.

While Clarkson struggled to impose himself under Tony Mowbray last season, returning to Liverpool in January after just seven appearances, Morton has thrived in new boss Jon Dahl Tomasson’s system.

At the mid-season break, Morton has made 22 appearances for Rovers, with 17 starts, including a run of 15 starts in the last 16 Championship games.

But how has the youngster performed at Blackburn so far, and could we expect him to take up a role at Liverpool upon his return?

To get the inside view of Morton’s time in Lancashire, we spoke to Lancs Live‘s Blackburn Rovers reporter, Elliott Jackson (@_ElliottJackson).

What was the reaction like when the Morton deal was announced?

Obviously, the deal dragged on for a few weeks with Liverpool keeping Morton as part of their pre-season squad even though everything was agreed.

Fans were pleased, though.

A player of Morton’s calibre was always likely to get tongues wagging, especially after the success of Harvey Elliott.

Which roles has he been used in?

Morton has been used in a few roles but predominantly as a No. 6 in a double pivot. At times, he’s been the sole six, operating as a deep-lying playmaker.

He’s also played as a No. 8 in other matches.

And how has he performed?

Morton took a few weeks to adapt to the pace of the Championship and was more impressive for his off-the-ball work than his passing ability.

As the months have passed, he’s started to dictate the pace of Championship matches more.

Naturally, he’s grown in confidence and has started the last nine league games, becoming an integral cog in central midfield.

Any particular highlights or lowlights?

There have been a few standout games. Morton was excellent in the recent 1-0 away win at Hull City and in the home victory over Rotherham United.

When he has been given time and space on the ball, he has looked a class above recently. There have been a few matches where he has gone missing, though.

Away from home, he has struggled a little more when pressed. Last time out against Burnley, he really found it difficult to influence the match and was overrun in midfield.

Of course, he’s only 20 so there will be peaks and troughs. This is all part of the learning process.

Why has it worked out for Morton when it didn’t for Leighton Clarkson?

I think that Clarkson was not ready for the speed and physicality of the division.

Morton was pretty quick to adapt to what was required off the ball and his quality on the ball has followed as he’s grown into the loan.

It also comes down to style, too.

Jon Dahl Tomasson is intent on his team building possession and playing from defence, which suits Morton’s game.

That wasn’t always the case under Tony Mowbray, who would change his philosophy based on his squad of players.

Can you see him eventually taking up a role in the Liverpool squad?

Possibly. He’s got plenty of potential and clearly Jurgen Klopp trusts him with the opportunities he’s had so far.

I don’t think he’s ready yet, by any means.

A Premier League loan would be the logical next step after this season, assuming he continues to perform well.

• Thanks again to Elliott Jackson for his take on Morton. Follow Elliott on Twitter @_ElliottJackson and catch the Championship Chat Podcast @champchatpod24.