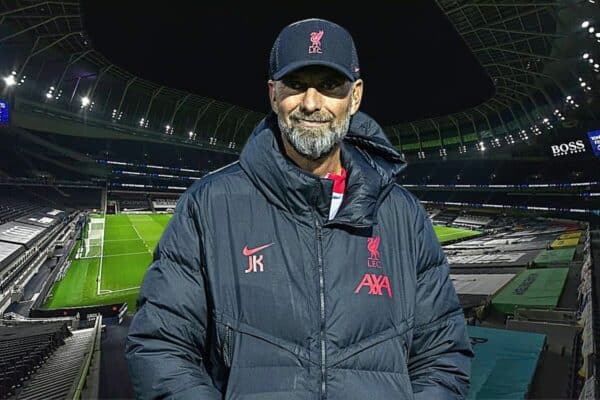 After taking charge of his 400th Liverpool game in Tuesday’s win over Napoli, Jurgen Klopp will reach another impressive milestone should his side secure three points against Tottenham today.

The Reds are one win away from recording a 250th win in all competitions under Klopp.

In 16 games in all competitions against Spurs, the German has won nine and drawn six with a single defeat. In total, he has won nine of his last 13 against the north London club.

Klopp has won one of his six matches up against Antonio Conte, with one defeat and four draws.

Last season, the teams shared the points in both league games, with a 2-2 draw at the Tottenham Hotspur Stadium just before Christmas, and a 1-1 draw at Anfield in May.

Struggles away from home

Liverpool are yet to win a Premier League away game this season.

The last time they went six away league matches at the start of a season without winning was in 2006-07.

The Reds have not led at any stage of a Premier League game away from home in 2022/23, while no team has won fewer points on the road this season than Liverpool’s two.

Not since January 2021 have Klopp’s side failed to score in back-to-back away league games.

Defeat here would be the first time they have lost three successive league matches since February 2021.

Liverpool are unbeaten in their last nine league meetings against Tottenham, and 10 games including the 2019 Champions League final.

They are yet to lose a game at the Tottenham Hotspur Stadium, winning both of their games there before last season’s 2-2 draw.

Since the 0-0 draw at White Hart Lane in October 2015, Liverpool have scored in 13 successive league meetings against Spurs, and in 19 of the last 20.

How Salah & Bobby can eclipse Fowler

Mo Salah and Roberto Firmino both have five league goals against Tottenham, one fewer than Robbie Fowler’s Premier League best for the club of six.

Salah has scored in his last three games, not scoring in four consecutive matches since October 2021.

He has scored six times in his 11 Liverpool appearances against Tottenham in all competitions, with eight in 14 career games against them, having also netted for Basel and Fiorentina against the north London club.

More memories from this fixture

Klopp handed Trent Alexander-Arnold his first senior appearance for the Reds against Spurs in a League Cup tie at Anfield in October 2016.

Joel Matip made his league debut against them at White Hart Lane in a 1-1 draw in August 2016.

In this fixture last season, Andy Robertson became the first Liverpool player since Steven Gerrard in 2001 to score and then be sent off in the same game.

Alex Oxlade-Chamberlain scored his first Liverpool goal five years and two days ago in a 4-1 win at West Ham.

Spurs lost their last home league game – beaten 2-1 by Newcastle. That loss followed 10 successive home wins in all competitions, in which they scored 27 times.

They have failed to score in just one of their last 18 league games – in the 2-0 defeat at Man United last month.

Conte’s side have conceded two goals in each of their last three league matches – away at United, at home to Newcastle and at Bournemouth last weekend.

They’ve also not kept a clean sheet in their last five league and cup matches.

Harry Kane has scored seven times in 15 games against Liverpool with only Jimmy Greaves (11 goals in 16 matches) scoring more in the fixture.

This will be the third time Andy Madley has taken charge of a Liverpool game this season, after he oversaw the opening day share of the points at Fulham and the 3-3 draw with Brighton.

Remarkably, he has only ever refereed one Tottenham game, a 1-0 victory at West Brom two years ago.

His most recent game was Brighton‘s 4-1 win over Chelsea last weekend, while he is yet to issue a red card this season.