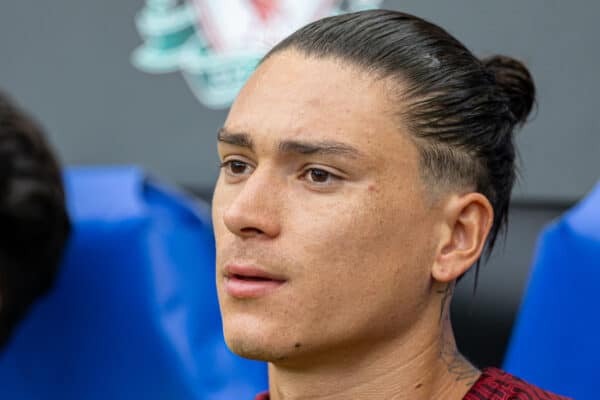 “I always dreamed this day would come!” – Darwin Nunez gets World Cup call-up

Darwin Nunez will fulfil a lifelong dream this winter, with the Liverpool striker called up to the Uruguay squad for the World Cup in Qatar.

Nunez has been a regular in the Uruguay squad for the past two years, and as a club-record signing and Ballon d’Or nominee, his call-up may not come as a surprise.

But the striker’s joy at being confirmed as part of Diego Alonso’s squad for the upcoming tournament was all the same, with the news announced on Thursday night.

Alonso has named a 26-man group ahead of clashes with South Korea, Portugal and Ghana in Group H, including two more familiar faces for Liverpool supporters.

Luis Suarez is part of a core of veterans in the squad, while Sebastian Coates is expected to be a key starter at centre-back.

Six players called up, including Suarez, are in their mid-30s, with Nunez among the youngest compared to Diego Godin, Edinson Cavani, Martin Caceras, Fernando Muslera and Sebastian Sosa.

The 23-year-old will fly out to join his international team-mates following the Premier League clash with Southampton on Saturday, which should bring his 18th appearance for Liverpool.

“I always dreamed that this day would come,” came his reaction on Twitter. “Let’s go!”

Nunez is the sixth Liverpool player to be called up for the World Cup, following Alisson, Fabinho, Ibrahima Konate, Jordan Henderson and Trent Alexander-Arnold.

Virgil van Dijk is set to be confirmed in the Netherlands squad later on Friday, while there is still a chance that Thiago makes it into Luis Enrique’s Spain group.