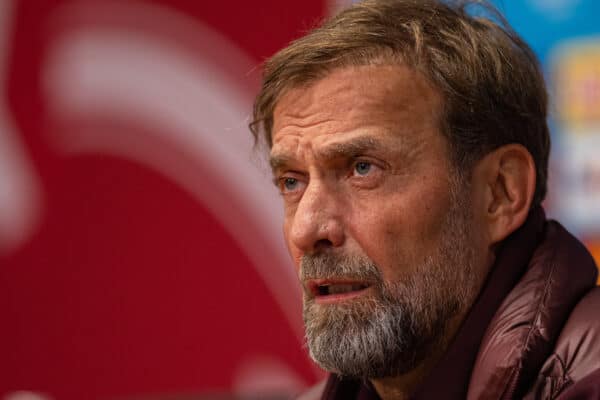 Asked about the issue of minor injuries ruling players out of the World Cup, Jurgen Klopp stressed that “these problems were so clear” years ago.

With less than three weeks to go until a mid-season World Cup, any minor setback is now being viewed as a threat to a player’s involvement in Qatar.

Tottenham forward Heung-min Son became the latest high-profile player to come in doubt for the tournament after undergoing surgery for a fractured eye socket, joining a long list that includes the likes of Gini Wijnaldum and Paul Pogba.

But when asked for a manager’s view of how to manage the situation, and whether certain players should be rested, Klopp dismissed the question.

“Now all of a sudden players get injured and they say ‘oh, he cannot play the World Cup’.

“So this specific problem, that players who were injured late in the season cannot play the World Cup, is not new.

“After a long season, it happens everywhere in the world.

“But now, starting the World Cup a week after the last game, ‘oh, that’s a bigger risk’ – crazy.

“Nobody cares about us, how we deal with it. You ask me now the question and if I’ll give you all the answers.

“What do you think I should do? Ask the players before Southampton or Derby, ‘wanna play’?

“Asking the question is one thing, but we are all guilty – and you more than I – of letting it happen in the first place.

“Now it happens, now we have the situation and that’s it. We have to go along with it.

“For the players who get injured and cannot play, it’s a disaster, but how can we change that?”

Liverpool have already seen Diogo Jota ruled out of the World Cup after suffering a serious calf injury, with the likes of Jordan Henderson, Darwin Nunez and Alisson all hoping to avoid issues before joining their countries.