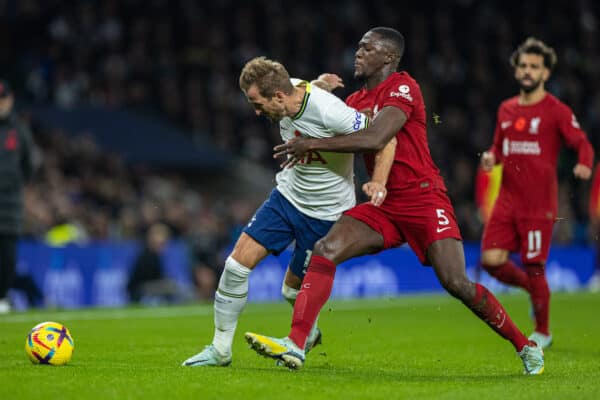 Ibrahima Konate‘s return to the Liverpool side has brought back-to-back victories, with the Frenchman a standout in Sunday’s 2-1 win at Tottenham.

It almost goes without saying now that Liverpool’s downfall this season has been their inability to keep players fit for a prolonged period.

Konate is one of those whose struggle for fitness has led to issues on the pitch, with Joel Matip‘s lengthy absence not helping the situation alongside an overplayed Virgil van Dijk.

But the 23-year-old made an imperious return with two winning performances last week, first helping to keep a clean sheet and inflict a first defeat of the season on Napoli, then holding on for victory over Spurs.

He dominated Harry Kane for much of the game on Sunday, while also covering for Trent Alexander-Arnold as he toiled in his battle with Ryan Sessegnon out wide.

This played out in the statistics, with Konate better than any other player in a host of defensive metrics:

Ibrahima Konate made more clearances against Tottenham than any other Liverpool player has in a Premier League game this season (8).

He also won more duels (11), won possession more times (9) and won more aerial duels (7) than any of his teammates. ? pic.twitter.com/xbMXMn4AFn

Ibrahima Konaté with a huge display.

Speaking to LFCTV after the game, the young centre-back said he was “very happy” to make his comeback after two difficult injuries.

And taking to Twitter in praise of Konate, Liverpool fans echoed his sentiment:

Konate transforms Liverpool’s defence he’s got it all & still only 23. His physical gifts are plain to see he’s a colossus & so fast but some footballer too.

11 ball recoveries, 8 clearances, 2 interceptions, 11/13 duels won. Said it after the Napoli match, but it can't be stated enough how important Ibrahima Konaté being fit is for Liverpool. Well-synced with Virgil van Dijk and they complement each other incredibly well. Top CB.

How good is it having Ibrahima Konate back in defence!? That was some display from him in that second-half.

Konate won 88% of his aerial duels today. An absolute colossus.

Monsieur Deschamps, you are spoilt for riches at CB but Konaté would be the shrewdest choice of all.

Ibrahima fucking Konate. What a player

How on earth did we have a free run at Konate aswell by the way?! A £36m release clause and nobody else went near him ?

It is seemingly not only Liverpool fans who are taken by the No. 5, either:

There is no doubt that Konate is a world-class centre-back in the making, and that he should now be the player Jurgen Klopp builds around at the back.

Matip and Joe Gomez have stepped in excellently alongside Van Dijk at various stages, but neither possess the all-round ability and scope for improvement that an on-form Konate does.

The hope is that he can now stay fit and avoid further injury – and, from a selfish point of view, stay out of the spotlight when it comes to Didier Deschamps’ France squad.

A break for the World Cup, and the extended period of training that comes with it, could be key to maintaining Konate’s form and fitness throughout 2023.