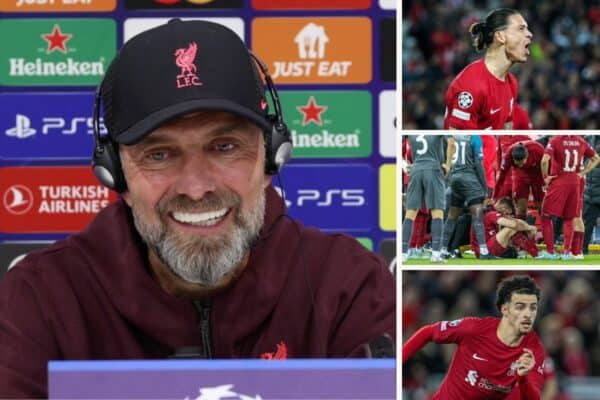 After Liverpool beat Napoli 2-0 to conclude their Champions League group campaign, Jurgen Klopp discussed Curtis Jones‘ performance, the return of the 4-3-3 and James Milner‘s injury in his post-match press conference.

“We had to show a reaction, and we did”

In truth, many supporters would probably have taken a 0-0 before the game, but a 2-0 win will do nicely!

Klopp was more than pleased with his side’s performance, on a night where the Reds limited Europe’s in-form team to very few opportunities.

“We all agreed that we had to show a reaction, and we did,” Klopp said.

“In all the moments where they could, you immediately saw how good they are, in all the 1v1 situations, and collectively as well. But we did really well, we kept the spaces small, and all of a sudden we could win challenges.”

It’s been a hugely frustrating season for Jones, having missed the vast majority of the campaign due to an unusual calf problem.

His selection tonight proved the faith Liverpool’s coaching staff still have in him, with the England under-21 international impressing on the left side of the attack.

Klopp explained how he was reluctant to make wholesale changes for this game, but wanted to rest at least one of his attackers, with Darwin Nunez starting on the bench.

“It was obviously not a game for massive rotation or whatever, because of the situation, but we had to a little bit, and that’s why we didn’t start all three,” he said.

“I thought Curtis did really well, in an unfamiliar position for him.

“And when you can bring on a fresh player with the quality of Darwin, that’s really helpful.”

The last thing Liverpool needed was another injury in midfield, but less than a minute into the second half, that’s what they got.

However, Klopp seems confident that Milner’s problem is nothing serious, with further tests to take place in the coming days.

“I don’t know. He seemed to be fine now but we probably have to do further checks, I assume,” Klopp added.

The boss opted to revert to his tried and trusted 4-3-3 system for the visit of Luciano Spalletti’s side, having also deployed a standard 4-4-2 and a 4-4-2 diamond in recent weeks.

It was a move that paid off, with Liverpool looking much more compact against a Napoli side who hadn’t lost a match in Serie A or in Europe ahead of this game.

Same again at Tottenham on Sunday?

“We will see what we do against Tottenham, this system was never off the table. We had to change a little bit and give ourselves an impulse and feel the defending stuff again in a new way.”