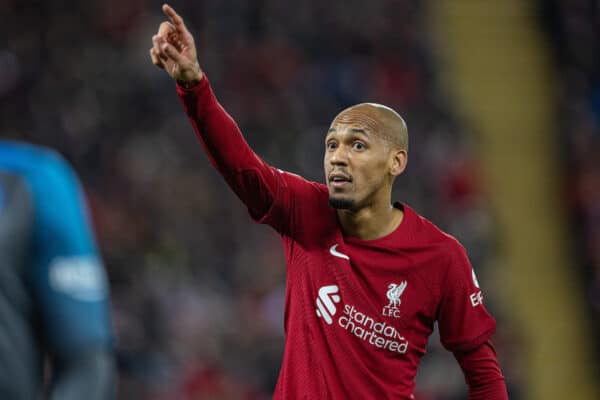 Jurgen Klopp has acknowledged a difficult start to the season for Fabinho, but welcomed a “clear sign” of the No. 3 being back to “how we know him.”

In a campaign plagued by injuries, availability is the currency for Klopp and his medical staff at Liverpool.

Fabinho, to his credit, is one of only six players to make every matchday squad so far, and one of just four to feature in every game, clocking the third-most minutes of any outfielder.

But that has only magnified his struggle for form, with there being no opportunity for a reprieve for a player who appears to be struggling with mental and physical fatigue.

Liverpool kept a valuable clean sheet in the 2-0 victory over Napoli in midweek, and speaking ahead of the trip to Tottenham, it was put to Klopp that the display was a step forward for Fabinho.

“The game was a clear sign of Fabinho how we know him.

“It was a good game. We defended, in all positions, on a different level to the week before. Yes, it was good.

“It felt good, for him it was very important to realise that was possible as well, and that was a good start in the right direction.”

It is, perhaps, refreshing to hear Klopp speak so candidly on Fabinho‘s situation rather than deflect claims of a drop in form, as it is undeniable that the 29-year-old has struggled.

While it is not the only metric to gauge a defensive midfielder’s performance, it is staggering that, in his last eight games, he has won just one tackle of an attempted nine.

In that eight-game stretch, however, Fabinho did make more interceptions (12) than in the previous 11 games in all competitions (eight).

The hope is that Liverpool can now enjoy a revival from their midfield anchor, who will join the Brazil squad for the World Cup after a final three games for his club.