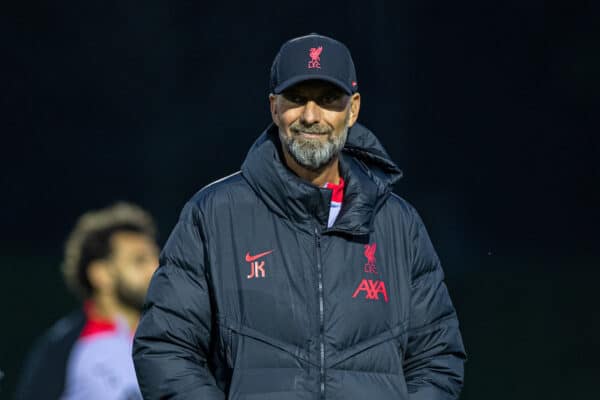 Liverpool manager Jurgen Klopp will bring up his 400th game in charge of the club in the Reds’ final Champions League group game against Napoli on Tuesday, but he’s already targeting plenty more.

The German has brought the glory days back to Liverpool since his arrival on Merseyside in 2015, winning the Premier League, Champions League, FA Cup, Club World Cup, Community Shield and UEFA Super Cup in the seven years he’s been at the club.

Aside from the freak 2020-21 season that was blighted by injuries and played with no fans in attendance, his Liverpool team have developed year upon year.

This season, however, he is facing a different challenge, with the Reds struggling to find any consistency in the Premier League, having only won four of their opening 12 league matches.

Their most recent domestic games saw them beaten by Nottingham Forest and Leeds, the two teams at the very bottom of the table, with questions being asked as to whether the successful team Klopp has built is now in decline.

Nonetheless, 400 matches as manager is a hugely impressive milestone, with the 55-year-old becoming only the fourth Reds manager ever to reach the landmark, following Tom Watson, Bill Shankly and Bob Paisley.

And speaking ahead of the clash with Luciano Spalletti’s side, Klopp expressed his pride at his latest “pretty special” achievement, but admitted it was slightly overshadowed by his teams’ recent poor form.

Having a signed a new contract until 2026 earlier this year, he also made clear his aspirations to manage Liverpool for another 200, 300 or 400 matches, leaving nobody in any doubt of his commitment to the club, despite their tricky start to the 2022/23 season.

“A lot,” he told Liverpoolfc.com when asked what reaching 400 matches as Liverpool manager meant to him.

“But in general, and how we all know, that’s obviously a number I don’t expect the next 20 managers of Liverpool will reach that as well because it’s pretty special, I know that, what we achieved over the years.

“It just doesn’t feel in the moment like that but it’s no problem, the number is still impressive. I’m very grateful for that, that I was allowed to do that.

It’s been a very difficult season so far, but that shouldn’t overshadow the incredible work Klopp has done for the club so far.

Here’s hoping for many more special memories in the coming years.