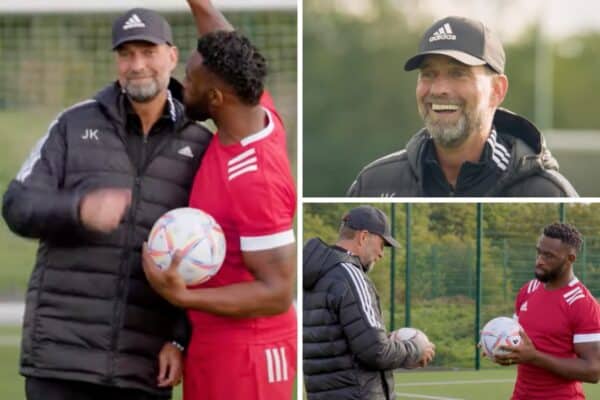 Jurgen Klopp is never short on a word of wisdom, whether that be in a press conference or on the training pitch, which South Africa’s rugby World Cup-winning captain Siya Kolisi can now attest to.

The Liverpool manager has a reputation that precedes himself, for all the right reasons – someone who isn’t afraid to ask for help while also extracting the most of those around him.

The Reds have benefitted greatly from his mastery since 2015 and anytime you get an insight into how he works ought to be treasured.

And Adidas, who Klopp represents as a brand ambassador, are the latest to deliver the goods with a series of videos that sees the Reds boss share coaching insights with Kolisi, who swapped a rugby ball for a football.

Kolisi, a Liverpool fan, was put through his paces in dead ball situations, with penalties, free kicks and corners – with Klopp there to offer words of wisdom, and laughs, throughout.

The series is insightful into how Klopp operates, always seeing the bigger picture even if the execution is not yet there – he even shows off his own abilities, and with a rugby ball too!

“A very very special situation,” Klopp said of penalties. “It’s not actually a really difficult thing to do but because of the situation, it’s like the goal shrinks second by second, yard by yard.

“The pressure from outside, what are you playing for, all these kinds of things…The technique is not difficult. You have an idea in your mind, if you want to score and shoot there, you shoot there.

“Whatever the goalie is doing, whatever the crowd is doing, however loud it is or whatever you’re playing for, you focus your mind where you want to put the ball.”

The pair enjoyed plenty of laughs, especially when Klopp hit the crossbar with the rugby ball, Kolisi was left to say “that was amazing!”

“I caused a lot of free-kicks, but I wasn’t allowed to take them,” Klopp said as they moved onto free-kick taking.

And when Kolisi struck the mannequin in the head, the boss jokingly said: “That’s not bad, I love that tactic. That’s actually what we use quite a lot!

“First free-kick of the game, always in the face of that one guy!”