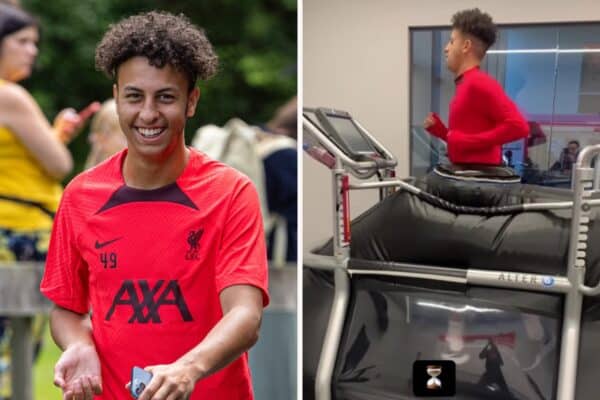 Liverpool are hoping to see Kaide Gordon back in action after the winter break, but the young winger is still not in full training after nine months out.

It is a long process for Gordon, who has suffered a number of injury problems since his last outing for the under-21s back in February.

The £3.4 million signing from Derby turned 18 in October, after a breakthrough campaign that saw him play four times for the senior side and score his first goal.

But he is currently out with a pelvic problem, with the latest word from the club being that he is expected back soon after the restart.

The injury has limited his ability to train, and though he remains firmly in Jurgen Klopp‘s plans for the first team, the emergence of Ben Doak serves as a reminder of the fragility of a young player’s career at the top level.

As it stands, Gordon is not yet training outdoors on firm ground, with the teenager providing an update via his Instagram story on Wednesday.

???? Kaide Gordon is still undergoing his rehab for a long-term injury.

Running on a @Alter_G anti-gravity treadmill to eliminate risk when working on his fitness.

Slated to return after the winter break, there’s still hope he could join the first team in Dubai. pic.twitter.com/OYqKBpZLmA

In a short video, the forward can be seen on an AlterG treadmill at the AXA Training Centre, with the anti-gravity technology designed to eliminate impact when running.

AlterG’s official website explains that it helps in “rehabbing faster, training while protecting or recovering from an injury or surgery, or increasing training volume while minimising stress-related injuries.”

“No other unweighting technology offers as much precision, accuracy and comfort.”

The theory is that Gordon is able to maintain and build his overall fitness while significantly reducing his chances of suffering any recurrence or further damage to his current injury.

There appears to be a long road ahead for Gordon when it comes to his return to the first-team squad, but the hope will be that he can make the trip to Dubai for next month’s training camp.

“The conditions to train and recover in Dubai are just very, very good,” Pepijn Lijnders told LiverpoolFC.com earlier this week.

“A change of scenery is always a welcome factor when recovering from a long-term injury.”