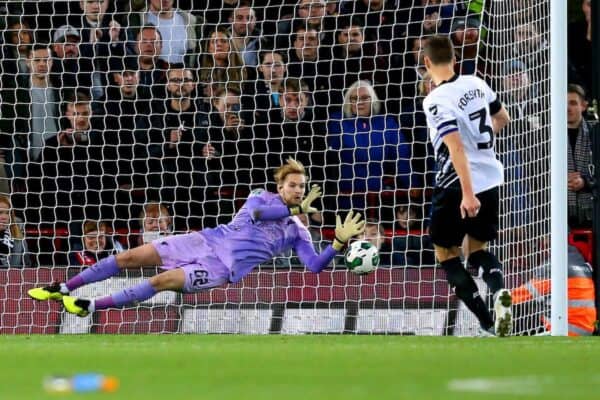 Caoimhin Kelleher saved three penalties to put Liverpool into the Carabao Cup fourth round after a 0-0 draw against Derby County.

Rotation, especially in a home match against a lower-league opponent, is always the order of the day in the Carabao Cup and Jurgen Klopp named five full debuts in his starting XI; for Stefan Bajcetic, Bobby Clark, Calvin Ramsay and, surprisingly, Layton Stewart and Melkamu Frauendorf.

It meant for a particularly inexperienced forward line, and an overall average age of 21.8 years.

It was 11 changes from the last match and it meant for a disjointed opening half, lacking fluidity.

Oxlade-Chamberlain hit a volley wide, Stewart had a difficult chance which he put over the bar, and Tsimikas also volleyed wide.

When the Reds won this competition last season they had Divock Origi and Takumi Minamino as their goal threat, but without them and with Luis Diaz and Diogo Jota injured, there was a clear lack of quality in attack.

The visitors had a good chance early in the second half, but Bird scuffed his shot across goal.

Liverpool enjoyed more of the ball without really threatening, Carvalho perhaps should have been on the end of a cross.

Klopp finally made a change in the 66th minute, bringing on Harvey Elliott, Darwin Nunez and Roberto Firmino in an attempt to win the game and avoid penalties.

Then it was the turn of 16-year-old Ben Doak to be handed their debut for the club. The Scot has been exceptional for the Reds’ youth teams this season, moving up from under-18s to under-21s and now a first-team debut.

Liverpool huffed and puffed, Elliott made a superb run from midfield but the Derby ‘keeper somehow kept his effort out.

Liverpool hadn’t actually won a League Cup tie at Anfield inside 90 minutes since 2016, when Ben Woodburn scored the winner against Leeds, and that strange run continued with 0-0 at full time.

To the lottery of penalties.

Kelleher saved three to become the hero, just as he was in the final of this competition last season!

The win means that Liverpool’s next match after the break for the World Cup will be in the fourth round of this competition, on the midweek before Christmas.