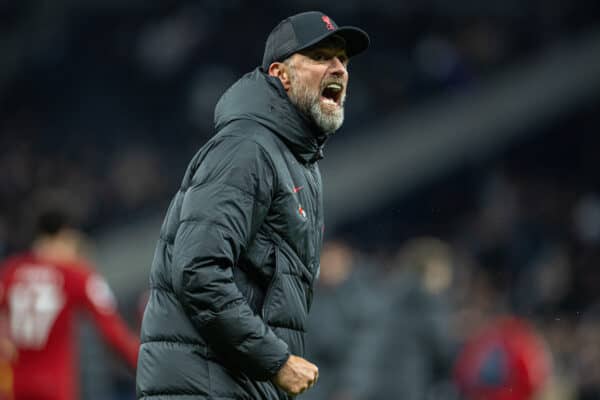 Liverpool fans hail “massive win” – but we all “need a drink” after that 2nd half!

Liverpool picked up a vital 2-1 win away to Tottenham on Sunday afternoon, with fans delighted with the away drought finally coming to an end.

The Reds made the trip to north London looking for their first league away triumph of 2022/23, and to capitalise on losses for Chelsea and Man United earlier in the day.

Mohamed Salah fired home a ruthless double to give Jurgen Klopp‘s side a 2-0 half-time lead, in what was a largely excellent performance.

Harry Kane pulled a goal back midway through the second half, however, but Liverpool held on in an agonising finale.

That was not a fun second half but a massive, massive win for Liverpool. Salah & Nunez a real threat. I need a drink after that….! Up the reds! #TOTLIV

Horrible half of football ? first away win of the season

Massive win for Liverpool. Not a perfect performance by any means but this is a moment for fighting through and then showing quality when you can and they did that here. Win on Saturday and suddenly the gap doesn't look too big with key players coming back after the World Cup.

GET IN! Woeful last 30, but that's a huge victory.

Salah and Konate the standouts by a mile.

First away win in the Premier League this season… pic.twitter.com/mvgd0rNHMi

Massive win. Fucking get in.

More of those away wins reds please

That 20 minutes was massive for our top 4 race. Chelsea/United both losing. Results all go our way next week too and it’s looking a little healthier going into the World Cup.

It’s a massive win. Beat Southampton next week, come back firing after the break. Top 4 is there for us if we can sort ourselves.

Mohamed Salah the difference maker again on a night that could have ended very differently for Liverpool. A lot of the recurring problems still present, particularly in the second half, but getting the three points is the most important thing. A massive win away from home. #LFC

Konate transforms Liverpool’s defence he’s got it all & still only 23. His physical gifts are plain to see he’s a colossus & so fast but some footballer too.

The magnitude of Liverpool’s victory cannot be questioned, as they breathed new life into their top-four push.

With Chelsea and United slipping up, they seized their opportunity in ugly fashion, gaining three points on a trio of Champions League-chasing rivals.

The key now is to head into the World Cup break with back-to-back wins against Derby and Southampton in the League Cup and Premier League, respectively.

If Klopp’s men can do that, they will be feeling a lot better about themselves, especially with important figures such as Luis Diaz and Diogo Jota returning from injury in the New Year.