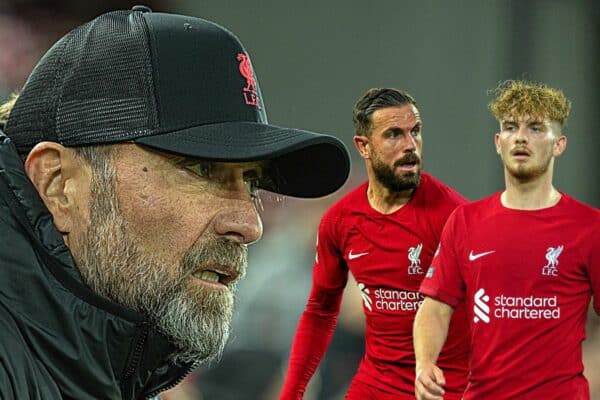 Jordan Henderson or Harvey Elliott looks set to be the main decision Jurgen Klopp must contend with when Liverpool host Southampton at Anfield on Saturday.

This will be the final competitive match the Reds play for almost six weeks, with the season grinding to a halt for the World Cup in Qatar.

The break comes at a time when Liverpool finally look to be gaining some consistency, having won their last three matches in all competitions.

Should they win here, it will be the first time Klopp’s side have won four matches on the bounce this season, and another three points is vital, with Liverpool having only collected 19 points from their first 13 league games.

After wholesale changes in the Carabao Cup victory over Derby on Wednesday, many of Liverpool’s senior stars will return to the XI this weekend, against a Southampton side who appointed new manager Nathan Jones on Thursday.

Here, we look at two ways the Reds could line up.

From Jurgen Klopp‘s pre-Southampton press conference on Friday, we know the following:

Last Sunday’s victory at Tottenham was Liverpool’s first away win of the season, with Klopp likely to name a similar, if not identical side to the one that secured three points in north London.

The return to Klopp’s tried and trusted 4-3-3 system has paid off in recent matches, and should be the formation that we see again on Saturday.

Henderson is probably the only player that didn’t start against Spurs that could be in contention to return to the lineup.

If the captain comes back into the side, Liverpool could shape up like this:

If that’s what Klopp decides on, this would be the Reds XI:

However, don’t be surprised if Klopp decides to name an unchanged team from the one that saw off Antonio Conte’s side last week.

Elliott came off the bench in the win against Derby, but should be fine to start again.

Milner and Matip are back in training but are unlikely to be ready to start.

If Klopp goes with the same team that won at Spurs, this would be the XI:

That team would see Liverpool line up as below:

Even if Liverpool do manage to secure another three points here, Klopp will welcome the break for the World Cup, after a difficult first half of the season.

Luis Diaz is among the players expected to return to action when the squad reconvene at the end of the year, with injuries causing havoc for much of the campaign so far.

No more team selections for six weeks for the boss. Let’s hope those involved at the World Cup come through unscathed!