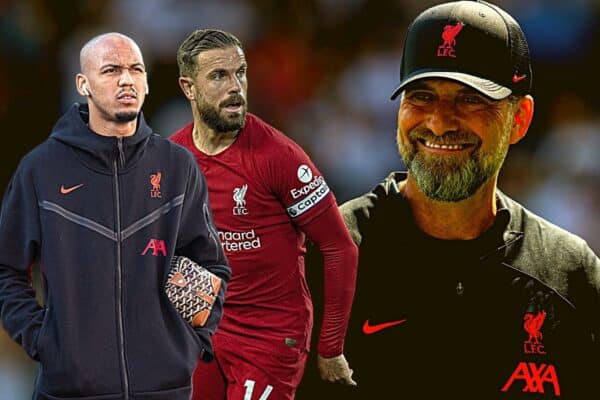 Liverpool lineups vs. Tottenham as Fabinho rotation decision made

Jurgen Klopp could name close to his strongest Liverpool lineup for Sunday’s trip to Tottenham, though he could opt to rest an overworked Fabinho.

The Reds head to north London this weekend eager to avoid another deflating afternoon in the Premier League.

On Tuesday night, they became the first side to beat Napoli this season, but their domestic efforts are far removed from that 2-0 win at Anfield, with back-to-back defeats to Nottingham Forest and Leeds.

Liverpool have still managed to bring their A-game in high-profile clashes despite their hit-and-miss form, and a similar performance to the 1-0 victory over Man City will be required.

The onus is on Klopp to nail his team selection, and that could include a big call over Fabinho‘s place.

Though there was no full update from Klopp in his pre-match press conference, there was information on two players:

With a clash with League One side Derby to come next in the Carabao Cup third round, there is less need for rotation in this tie.

That – and the relatively long, five-day gap after the win over Napoli – could see fewer changes to Klopp’s starting lineup, with the strongest possible XI likely.

Henderson is almost certain to come back in, then, as should Darwin Nunez after his game-changing cameo in midweek:

However, there is a case to argue that, despite an improvement in form against Napoli, Fabinho is still in need of a rest.

It is an option for Klopp to consider, and could be facilitated by Henderson’s return to the No. 6 role, though it is more likely to come days later against Derby:

In the event that Fabinho is rested, then, the Reds could shape up as below:

As mentioned, it is far more likely that Klopp will employ almost wholesale rotation when focus shifts to the Carabao Cup, with fringe players and youngsters brought in against third-tier Derby.

The manager will be hoping his key names can push through before a timely break, with six days between Premier League games and a long pause for the World Cup to come.