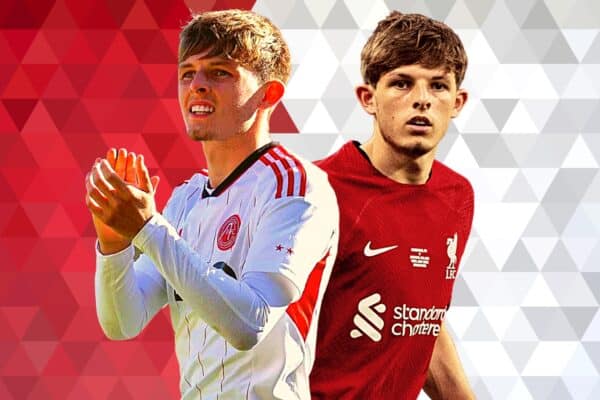 In his second loan spell away from Liverpool, Leighton Clarkson is finally finding his feet. And at Aberdeen, he is doing so in an unfamiliar role.

An aborted stint with Blackburn last time out led to Clarkson spending the second half of the season back with the under-21s.

This time around, there was a resolve to get it right. The 21-year-old headed to Scotland, where he has found himself a regular starter under Jim Goodwin at Aberdeen.

He has featured in every game possible, starting in 11 of 14 appearances so far, with four goals and two assists including a long-range strike on his debut.

A natural No. 6, capable of operating in a more advanced role as No. 8 if required, it is surprising to hear, then, that Clarkson has found his niche further forward.

To get the lowdown on Clarkson’s time at Aberdeen so far, we spoke to Ruaraidh Britton (@RuaraidhB), trainee reporter at Aberdeen Live.

What did you expect when the Clarkson deal was announced?

The Clarkson deal appeared to catch the fanbase off-guard amid what was Aberdeen’s busiest summer in the transfer market for a long time.

It was a pleasant surprise with the last-gasp rush to lure him to the north-east, but it was an announcement that brought with it a lot of expectation and excitement.

So much has been made of players that have been a part of Liverpool’s academy in recent seasons, so for the Dons to have secured Clarkson on loan was a massive coup for the club.

After ending up in a relegation scrap the season prior, there was a big demand for attacking quality in the middle of the park to push the team forward, and that was an expectation piled on him.

Helping create a much more threatening team on the park while also being able to score a few goals himself was the realistic requirement, and having the platform of a highly competitive Scottish Premiership to develop felt like a fantastic opportunity for Clarkson to showcase his talents.

Which roles has he been used at Aberdeen so far?

There has been a lot of chopping and changing in Aberdeen’s formation during recent fixtures, with Jim Goodwin swapping from a 4-3-3 to a 3-5-2 or a 3-1-4-2 setup almost every other game.

Luckily for Clarkson, that hasn’t impacted his role, as he has found a regular place in the starting XI as an attacking midfielder and most recently formed a terrific partnership with fellow youngster Connor Barron in front of Ylber Ramadani in the defensive midfield.

The range of formations seen so far have all had Clarkson positioned on the left of the attack, and he has proven to be a key player that can create opportunities for the forwards while also working his magic at set-pieces in that role.

And has he impressed? Any particular highlights?

Netting a screamer from 25 yards against St Mirren was quite the way to open his account, having only been named on the bench for his debut after being registered on the morning of the game.

An early injury paved the way for Clarkson’s first appearance, and he hit the headlines with his sublime strike from distance.

A beauty of a free-kick to defeat St Johnstone 1-0 followed up two weeks later, as his moment of excellence bagged a vital win on the road – something Aberdeen have struggled to do this season.

An assist and a goal off the bench in the League Cup tie with Annan Athletic, and the same against Hibs in the league at Pittodrie, have shown his capability of having a big impact in games.

A lot of his work often goes unnoticed, however, and despite an absence from the scoresheet in September and October, he has been making his presence known on the pitch with some outstanding moments of quality in buildup play.

How have the fans taken to Clarkson?

They say never fall in love with a loan player, but of the three brought to the club in the summer – Clarkson, Hayden Coulson and Liam Scales – he appears to have become the biggest hit of the trio with the supporters.

A slight concern over the gap between goals is the only current issue for fans, but he is still putting his all into his games for Aberdeen and having a positive impact.

There have been a lot of new faces to become accustomed to, with Bojan Miovski and Luis Lopes stealing the hearts of Dons fans in front of goal.

But Clarkson is right up there among the favourites following his stunning start to life at Pittodrie.

If he can make his mark in the bigger games against Celtic and Rangers following the World Cup, then there will be praise aplenty piled on Clarkson.

And if he can steer the side back to Europe before the end of his deal, then there will be no shortage of admiration from the Red Army.

Can you see him returning to Liverpool’s first team? If not, what is his level?

Despite all the concerns surrounding Liverpool’s midfield, it is difficult to see him working his way immediately into Jurgen Klopp’s side.

Essentially, he is up against Thiago for a role in the side, and that is no easy battle to say the least.

If he can continue to grow with Aberdeen and better his current record, then he has at least a claim for a place in the matchday squad.

But inevitably, it all falls down to where Clarkson’s heart lies come the end of the season, and whether he wants to be on the Pittodrie pitch or the Anfield bench.

His growth in Scotland has the potential to land him a big role in the Premier League, as he has shown what it takes to shine on the park.

But Aberdeen will no doubt be looking to retain Clarkson come the end of the season based on his current trajectory.