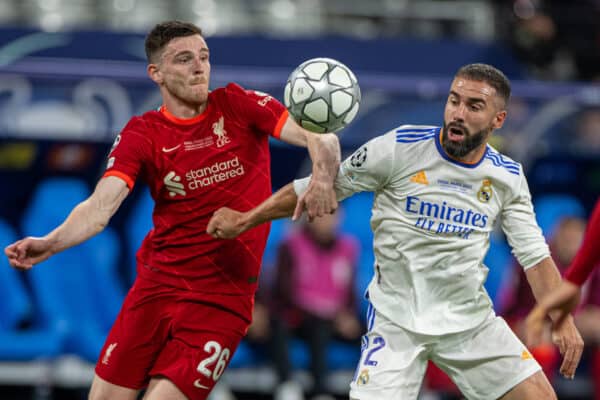 UEFA have now confirmed the dates for the Champions League last 16 ties against Real Madrid, with Liverpool at home for the first leg in February.

The Reds could have faced any of Porto, Real, Benfica or Bayern Munich in the first knockout round of this year’s tournament, but it was Real who were picked out.

It serves up a rematch of the final in May, and presents a big challenge for Jurgen Klopp‘s side, who have already faced Real four times in the Champions League and are yet to win once.

That includes two finals, along with a 3-1 aggregate loss in the quarter-finals in 2020/21 that saw Nat Phillips and Ozan Kabak start at centre-back in both legs.

Liverpool have struggled so far this season – particularly in the Premier League – while Real have only lost once in all competitions.

There is plenty of time for Klopp and his players to find consistency before they meet the Madrid giants, though, with the first leg to be played at Anfield on Tuesday, February 21.

After that, they will head to the Bernabeu for the decisive second leg on Wednesday, March 15.

That means the home tie will fall between the trip to top-four challengers Newcastle and the away clash with Crystal Palace.

The second leg in Madrid will then take place between a journey to Bournemouth and the visit of Fulham in the Premier League.

A bigger issue, though, comes with the prospect of finding a new date for the postponed clash with Chelsea, with there no longer a vacancy in the calendar as their own ties against Dortmund are set for February 15 and March 7.

If Liverpool progress in both the FA Cup and Carabao Cup, as was the case last season, they could then play seven times in February and six times in March, the latter of which also brings an international break.

The quarter-finals of the Champions League will take place in April and the semi-finals in May, with the final held in Istanbul on Saturday, June 10.