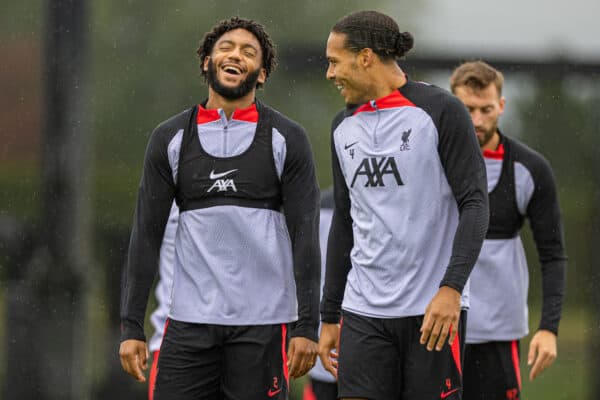 A 25-man Liverpool squad was pictured in training on Friday afternoon, with Naby Keita still absent but no new injuries ahead of the Tottenham trip.

The Reds travel to the capital this weekend as they take on Spurs in a late Sunday kickoff, looking to build on a strong 2-0 win over Napoli.

Progress in the Champions League has been the overriding positive in a strange campaign for Jurgen Klopp‘s side so far, with injuries a constant issue for the manager.

That has not changed as he prepares his side for a clash in north London, with James Milner (concussion) the latest player sidelined, but there are at least no further issues.

Cameras were present for part of Liverpool’s session at the AXA Training Centre on Friday, and 20 outfield players could be spotted.

Ibrahima Konate was among those involved having come through his first 90 minutes back from injury, along with the likes of Thiago, Curtis Jones, Darwin Nunez and Calvin Ramsay.

Jordan Henderson was back with the squad after missing the win over Napoli, with the captain likely to return to the starting lineup at the weekend.

However, there was still no sign of Keita, who was in full training at the end of October but appears to have suffered another setback, with Klopp not expecting him to feature before the World Cup.

Alex Oxlade-Chamberlain continues to build towards full fitness, however, and could come into starting contention for the visit of Derby next week.

Youngsters Bobby Clark and Stefan Bajcetic were also in senior training on Friday and will be part of the squad for the Carabao Cup, while Caoimhin Kelleher could make his first start of the season then too.

For now, though, the focus is on Tottenham, with Klopp likely to name his strongest possible lineup against Antonio Conte’s third-placed side.

Henderson and Nunez should both come in, with Jones dropping out along with the absent Milner.