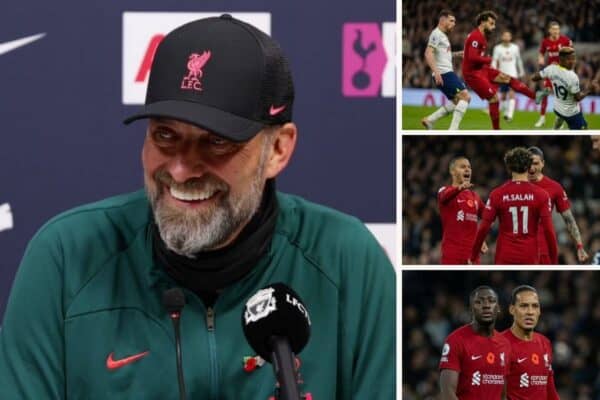 Jurgen Klopp may have got “carried away” with his post-match fist pumps, but he was “really happy” with Liverpool’s first league away win.

Here are four key points from the manager after the 2-1 win at Spurs:

Didn’t intend to dust off the fist pumps

Klopp’s famed fist pumps, and the opportunities for them, have been few and far between this season but they were on show at Tottenham.

It may not have been the plan, but we’re glad he let the moment take him.

“It was not my plan actually, I didn’t want to do it but I got carried away and I thought the people deserved it,” Klopp said,

“Tough times, they’ve had to travel a lot in the Premier League and they saw the first three points.

“Got carried away, but it is big.”

Here’s to seeing more of them.

Mo’s numbers will “be absolutely insane”

Mohamed Salah now has 14 goals to his name this season, his brilliant double putting the Reds on course for victory.

And while Klopp knows he will be remembered for his “insane” numbers, he was delighted with Salah showing an “outstanding attitude” and being a “real, real team player.”

“When you look back on his career in four, five, six years everybody will remember one of the best strikers you ever saw.

“The numbers will be absolutely insane.”

Winning on the road has not been easy in the Premier League and it was certainly a game of two halves for Liverpool.

The first, in control with two well-taken goals, the second saw Liverpool stretched and constantly under pressure – but with the season the Reds are having, it’s “normal.”

“Brilliant first half, good football, controlled, top goals and then Tottenham is coming back,” the manager explained.

“We had our counter-attacking moments, we were not precise enough – if you can score the third it changes the game, but we couldn’t – we had to keep fighting, and did that.

“If you want to win an away game, this is a completely normal way to do it. I’m really happy about it tonight.”

Ibrahima Konate made a second successive start at Tottenham, a performance widely hailed as the hosts kept Liverpool under pressure.

Despite an injury-hit season so far, he has hit the ground running and will certainly be rotated in midweek for the visit of Derby in the Carabao Cup.

“Ibou, first half already, outstanding – top game, absolutely. Of course, happy to have him, but we didn’t have him a lot,” Klopp said.

“This is now really intense for him, two starts in a row – I hope he is fine.”