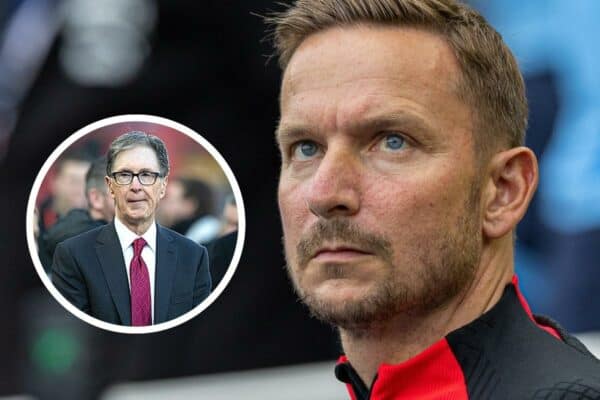 Liverpool assistant manager Pepijn Lijnders is the first to comment on news of FSG exploring the club’s sale, defending them as “good owners.”

It has now been widely reported that Fenway Sports Group have begun the process of seeking buyers for Liverpool, after releasing a statement confirming their desire for investment.

FSG maintain that they are simply open to third-party investors, rather than a full sale, but reliable sources including the John W. Henry-owned Boston Globe have reported otherwise.

Lijnders had not been expected to speak on the subject as he took media duties before the Carabao Cup clash with Derby.

But the outspoken assistant manager took the opportunity to defend FSG as “good owners” and insist they are “acting in the best interests of the club.”

“There was a small discussion, a little bit of talk between Jurgen and me, but from that moment on we start focusing.”

FSG have come in for both intense criticism and deserved praise during their 12 years in charge of Liverpool so far, but Lijnders was asked whether this latest development would impact plans for the future.

The Dutchman detailed exactly why he feels they are “good owners.”

“As I said, they are acting in the best interests of the club. They try to take the club forward, I believe they always did.

“For me, they are good owners and I will explain a few reasons why.

“First one, they tied down one of the best managers in the world, for seven-plus years. I think that says a lot.

“Second, they tied down the best players in the squad.

“The difference between European-top or world-top and sub-top is that you have to sell your best players. We tied down Mo Salah to a contract.

“And then, what’s even more important in my opinion is we have a stable academy.

“It’s our new home and it was not easy to replace Melwood, but we are sitting here, we are feeling at home.

“They invest in this, then of course the Main Stand, the new stand, they made a lot of good decisions.

“If they were not good owners, we would not be sitting here, because in the end we won a lot of cups, a lot of international and national prizes.

“That’s what I say, I believe they are acting in the best interests of this club, to take it further.”

Lijnders signed a new long-term contract along with Jurgen Klopp and the rest of his core staff in April, but the news of FSG’s possible exit has led to scrutiny over their situation.

The No. 2 stressed that they were “not naive” in knowing “things change” in football.

“We signed a deal with Liverpool Football Club and they are the owners, but we are not naive to think that things don’t change in football,” he explained.

“That’s how the football world works.

“As I said, our relationship with them is very, very good. I respect them so much, you have no idea.”

He added: “Everything that I know is what you guys know. It’s in the statement, it says very clear that they are searching for investors.

“What I said, what I like about this club and about our structure is that we’re used to the rumours around.