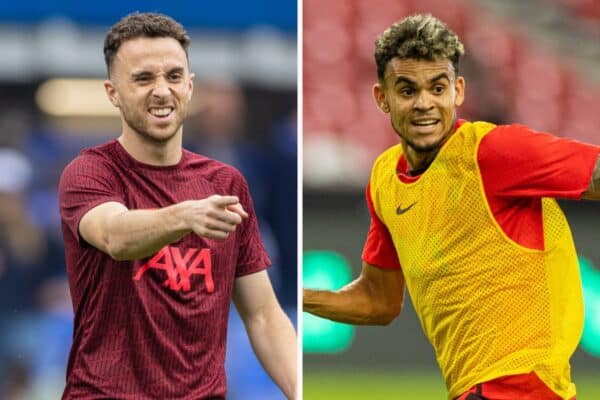 Pepijn Lijnders has confirmed that both Luis Diaz and Diogo Jota will travel with the Liverpool squad to Dubai next month, as they continue their rehab.

Liverpool have now confirmed their plans for the World Cup break, with a training camp in Dubai coming alongside friendlies against Lyon and AC Milan.

Jurgen Klopp and his squad will spend 12 days in the United Arab Emirates, and the majority of his key players will be present beyond the seven heading to the World Cup.

That will include both Diaz and Jota, though it is only the Colombian who can be expected to feature during training sessions and games.

Speaking to the club’s official website, Lijnders explained how the pair will take the next step in their recovery from long-term knee and calf injuries.

“Luis definitely [will be involved], if everything goes to plan,” the assistant manager said.

“We can’t wait to see him back, he is this player who smiles when he has the ball at his feet.

“Diogo will join us to continue his rehab.

“The conditions to train and recover in Dubai are just very, very good. A change of scenery is always a welcome factor when recovering from a long-term injury.”

Lijnders also revealed how the planning process for Liverpool’s trip to Dubai began 18 months ago, allowing them to secure “the best elite facility possible, before any other team.”

“You search for a combination of quality pitches, good infrastructure and a spot that can create atmosphere and togetherness in the team,” he added.

“We find all of this in Dubai.

“The weather will be warm and that will create some difficulty for training, but that’s not bad at all while preparing for the tough months coming.”

Along with Diaz, both Joel Matip and Naby Keita are expected to be back in full training during the break, though there has been no mention yet of long-term absentee Arthur.

Mo Salah, Thiago, Andy Robertson and Roberto Firmino are among those who will be part of the squad in Dubai, with a group of youngsters likely to fly out, too.