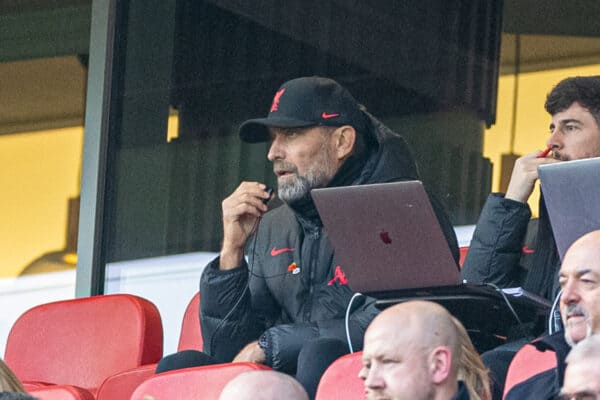 After Liverpool concluded the first part of their season with a 3-1 victory over Southampton, Jurgen Klopp explained how he was “really relieved” to be going into the World Cup break on a high.

A brace from Darwin Nunez, after Roberto Firmino‘s early opener, secured all three points for the Reds at Anfield on Saturday.

The result means Liverpool have now won four games on the bounce for the first time this season, in what’s been a largely underwhelming start to their Premier League campaign.

And despite their recent improved form, the German says he is “really relieved” to have reached the break for the World Cup, claiming he was “desperate” to secure six points from their last two league games against Tottenham and Southampton.

“Two weeks ago, when I knew these two games were still there, I wanted desperately to have these six points, and we fought really hard for it, and the boys deserve it.

“Champions League was obviously good, with a difficult start, but then was very convincing, so that’s good, still in the Carabao Cup, so that’s good.

“So there are good things, but we know we have space for improvement, and we will put a proper shift in to make this gap a bit smaller.”

A host of injury issues have thwarted the Reds’ campaign so far, with Klopp hoping for more luck with the fitness of his players when his squad reconvene after the World Cup.

Those not going to Qatar will take part in a mid-season training camp in Dubai, something Klopp is referring to as another ‘pre-season’.

“Our problem, in the whole first part of the season, we just had to play the same players too often, you cannot really give here a break, there a break,” the boss explained.

“We’re now happy everyone came through today without an injury, because the World Cup for these players is particularly important.

“We know we can do better, we have to do better, and we will do better. We have three weeks with a big group, a proper pre-season for the long rest of the season which starts with lots of games, but that’s fine.

“Let’s hope that we can stay fit. We had a lot of injuries already, maybe for the rest of the season we can be more on the lucky side of it, that would be helpful. And if not, we have to fight through with the boys we have.”