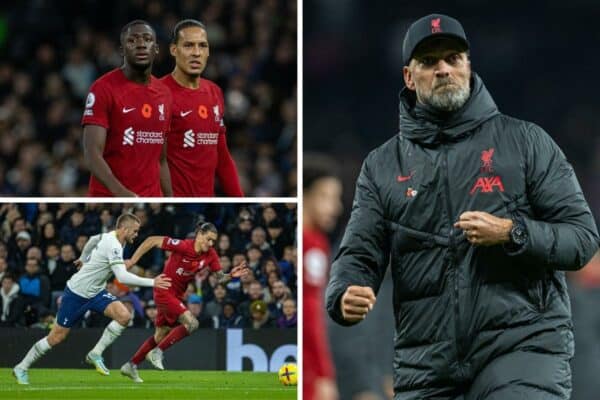 If you were not aware before now, Liverpool won away in the Premier League on Sunday! It was a milestone moment and one more than worthy of being discussed, amid other breaking news…

It became ragged and nervy, no doubt, but where they have let the dam wall break before, they did not on this occasion, with Mohamed Salah‘s first-half double enough to secure victory.

The three points were needed at Tottenham and Jurgen Klopp‘s side had to dig deep to get them.

Here, This Is Anfield’s Joanna Durkan (@JoannaDurkan_) is joined by Jamie Holme (@JamieHolme) and Adam Beattie (@beatts94) to talk an away league win at last, the positives and the youngsters we want to see against Derby.

An away league win at last, how did that feel?

JAMIE: I’d nearly forgotten how good away wins feel! It’s been a while, hasn’t it!

Given our recent results, the three points were absolutely huge, the performance was secondary.

After a dominant first-half performance, I was expecting a resurgent Spurs in the second half and that’s exactly what we got. It was back-to-the-walls stuff at times but the Reds dug in and got a fantastic win!

ADAM: It hadn’t even occurred to me that we’d still not won on the road until someone mentioned it on the way home, feels like some sort of disturbance in the force that we’ve had to wait until November for that!

It’s been a really difficult start to the season and there have been plenty of false dawns but that one feels really important given the league table, particularly with the likes of Chelsea and United dropping points.

It would sum the season up if we were to take three points from Spurs and then drop more at home to Southampton at the weekend, so next Saturday feels huge in terms of making that performance count for something.

JOANNA: Too right there, Adam. Too many times this season we’ve picked up a huge result only to falter against opposition that, on paper, we should be easily beating.

I hope that’s not the case against Southampton, who look like they will have a new manager in Luton’s Nathan Jones.

But back to the win, it felt really good! It was a little too tense at the end for my liking but a win is a win, irrespective of how we get there at this stage.

And Klopp’s fist pumps said everything.

Adam you were at the game, how was the atmosphere?

ADAM: It’s very rare that Klopp does the fist pumps at away games, so you could see how much it meant to him and the players.

They had to really dig-in in the second half but it felt like we deserved that, it’s not an easy place to go and Conte isn’t the most adventurous manager on the planet so coming away with all three points feels massive in the context of this season.

The atmosphere in our end was superb, even before the goals it felt as though everyone was bang up for it, which is always even more significant when the team are struggling on the pitch.

It was the last trip on the road before the World Cup and aside from those last 20 minutes, everyone really enjoyed themselves!

Nervy at times, but there were plenty of positives…

JAMIE: Yes, absolutely. In games like this you’re never going to have it all your own way, there will be periods when you have to suffer but I thought the performances of Salah, Darwin Nunez and Ibrahima Konate were the biggest positives.

Salah was at his ruthless best. His first touch was so good at times it was like he had glue on his boots.

Nunez was his usual chaotic self, creating chances and running the channels well. I thought his link-up play, decision making and awareness was much improved. He seems to really be finding his feet now.

Konate’s return is huge for us – his pace, power and aerial ability have been sorely missed. When fit, he transforms the way this Liverpool team can play. He has all the tools to be one of Europe’s top centre-backs.

JOANNA: There were plenty of positives, even if social media makes you think otherwise and as though we’ve not watched the same game!

Given the context, it ticked a lot of boxes and like yourself, Jamie, I thought Salah, Konate and Nunez were the standouts, but so was Andy Robertson – he’s the perfect example of what having a rotation option can do for this squad.

The manner of the victory cannot be lost either, this side have crumbled before and this will do them the world of good, with many of them now to have six days before they next play.

ADAM: It wasn’t enjoyable at the time but it was nice to see us show some grit at the end there and weather the storm, we’ve given far too many gifts out this season and Spurs looked dangerous towards the end so it was really pleasing to be able to hang on.

Touching on what Jo’s said on Robertson, he has looked like a man possessed in these past couple of weeks and he was outstanding again at Spurs, possibly the standout outfielder from this first half of the season for me.

The big man up front caused his usual carnage too, I’m not sure I can remember the last time a player excited me as much as him purely from just seeing his name on the team sheet. I’m convinced he’s going to score about a million goals after Christmas.

Which youngsters do you want to see vs. Derby?

JAMIE: Easy. Stefan Bajcetic. I’m so excited by this lad.

His ability to remain calm when pressed and his use of the ball and space is so impressive for a player his age.

I’ve also been really impressed with Ben Doak, Bobby Clark and Luke Chambers for the under-21s – I’d love them to get a chance to be in the matchday squad as a reward for their form this season.

ADAM: First and foremost I want to get back to Wembley!

There are plenty of youngsters who we haven’t had a chance to take much of a look at, however, and we should have enough within the squad to put Derby to bed.

I would like to see what Calvin Ramsay is about because it would be nice to be able to have him as an option moving forwards, and it would be good to see Bajcetic get a start because he looks like a really promising talent from what I’ve seen so far, as you’ve said Jamie.

It’s a good opportunity to give a few senior players a breather and to give the younger players an opportunity to show what they’re about, I’m quite looking forward to seeing how Jurgen approaches it.

JOANNA: It’s going to be exciting seeing some young players on the teamsheet, and like you guys, I’m definitely on board with Bajcetic and Ramsay starting.

You feel Clark will also be in with a strong chance of featuring, he’s made his debut already and has been an unused substitute four times throughout the season.

It’s going to be a mix of those on the ‘fringe’ and young players and it should be more than enough to get the job done. It keeps things fresh for everyone, already looking forward to it.