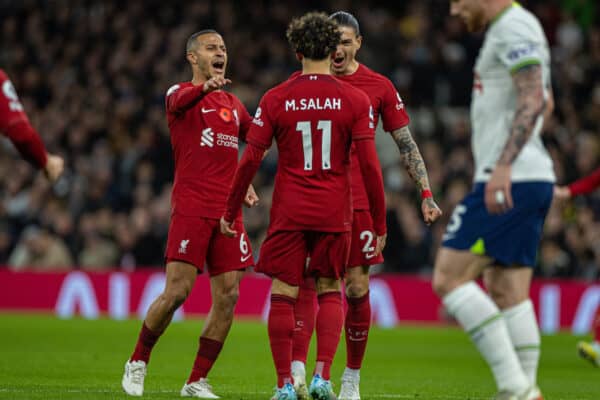 Spurs 1-2 Liverpool: Reds get first PL away win of the season – just!

Liverpool were excellent in the first half, but struggled in the second as Spurs put them on the ropes, somehow holding on for a vital 2-1 away win.

Liverpool’s final away game before the World Cup offered an opportunity to get their first Premier League away win of the season.

The Reds started on the front foot, dominating possession, with 72% in the opening 15 minutes.

Darwin Nunez, starting on the left of a 433, had an early effort that tested Lloris.

It was Nunez’s control and lay off for Salah that opened the scoring, with Salah taking a touch and clinically finishing past Lloris.

Incredibly, it was the first time this season that Liverpool had been ahead in any away league game.

Spurs, against the run of the play, hit the post soon after.

Salah added his and Liverpool’s second five minutes before half time, profiting from Eric Dier’s poor headed backpass to expertly chip the ball over Lloris.

Spurs came out quickly after the break, Dier forcing a save from Alisson off a corner, then the home side hitting the woodwork twice in quick succession.

Liverpool needed calm heads and control, but instead Alisson almost gifted Harry Kane on the edge of the box.

On the whole, Liverpool were much better than they have been this season, but with moments of individual sloppiness proving frustrating at times.

Spurs brought one back with 20 minutes to go, Kane expertly firing across Alisson into the bottom corner. It was a goal that seemed like it was coming. Substitute Dejan Kulusevski causing problems.

The home side had the momentum and Liverpool needed to change the game; Jurgen Klopp brought on Jordan Henderson and Curtis Jones to try to gain more of a foothold in midfield.

To say Liverpool were on the ropes would be an understatement, struggling to string any passes together. Lenglet headed over from a corner then Fabinho was very fortunate not to give away a foul on the edge of the box.

Klopp brought on Joe Gomez for Nunez in an attempt to see out the game with five at the back.

Somehow, Liverpool held on and got the three points, their first Premier League away win of the season.