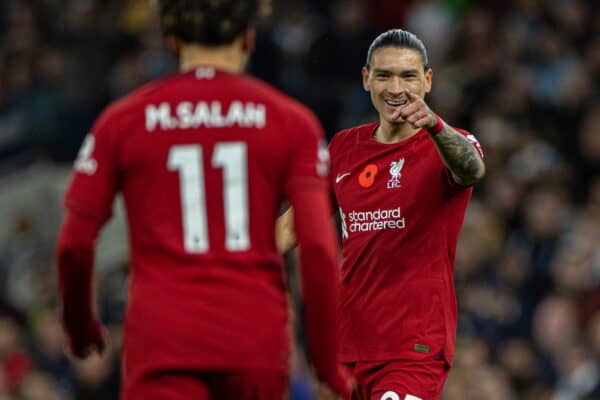 Liverpool grabbed a first Premier League away win of the season with a 2-1 win at Tottenham featuring a clutch of fine displays.

Before the game, Alisson admitted he “could be” in the strongest form of his career so far, and he was solid as ever, it was not quite the gold standard in north London.

There was a weird moment where he delayed and delayed before being closed by Harry Kane, and he was twice spared by the woodwork, but also made a number of big saves.

Could do little to keep out Kane’s outstanding finish for 2-1.

It is typical this display came in front of the Sky Sports cameras, because it only fed into the narrative.

Alexander-Arnold undertook a fierce battle with Ryan Sessegnon out wide, and there was some good, some bad in his defensive work, at times needing Ibrahima Konate to bail him out.

On the ball, he was outstanding, with a number of pinpoint, first-time passes that allowed Liverpool to spring forward and catch Spurs out.

What a relief it is to have Ibou back.

The Frenchman could perhaps have got a foot in the way for Kane’s consolation, but that would be hyper-critical to mark him down for.

Strong again alongside Konate, who is almost certainly his ideal partner now.

Van Dijk kept up well with the duel threat of Kane and Ivan Perisic, and help build out from the back alongside his fellow centre-back.

With no World Cup to look forward to with Scotland, Robertson is clearly holding nothing back in these final games before the break, just like Mo Salah up front.

The left-back was sharp and committed throughout, and could be heard directing Darwin Nunez and, later, Curtis Jones in their defensive work ahead of him.

In the buildup to Saturday’s game, Klopp acknowledged a “dip” in form from his No. 3, explaining that he, effectively, had little option but to play him out of his funk.

“Fabinho how we know him,” as the manager put it, was certainly much closer this time around, the Brazilian biting into tackles with more urgency and showing more thrust in pushing forward.

He did tire, and with teenager Stefan Bajcetic the only real option to replace him, he was required to stay on again.

Picked ahead of the captain in the right-sided midfield role, Elliott gave Liverpool another presence in the final third but lacked at times in stamping his authority on the game.

When the Reds needed to regain control, the teenager was the right choice to bring off.

Not Thiago‘s best game in a Liverpool shirt, with some moments of hesitancy and slack passing, but he was a particularly valuable presence off the ball, helping maintain pressure.

He kept going and dropped deeper when the Reds needed to hold on, but was played around at times.

It’s a bit of a shame that Salah’s hitting this level of form at this point, with Liverpool set for an extended break in which their No. 11 will be without competitive football.

But he was the difference again – bright on the ball, helpful without it – as he added two more goals to his tally as the clinical edge returns.

Entrusted to start on the left wing after the manager’s comments on the importance of defensive nous in the role in midweek, Nunez was the go-to man whenever Liverpool got the ball on the counter.

He looked dangerous up against Eric Dier and the dreadful Emerson Royal, troubling Hugo Lloris and laying on Salah’s first, but those concerns were exposed when Matt Doherty and Dejan Kulusevski came on instead.

Moved up front with the introduction of Curtis Jones, but had little time to make an impact there.

Among the group of players surely hitting the red zone in terms of minutes played, Firmino linked up play with the same verve we’ve come to expect but faded as the game went on.

Unsurprisingly subbed with just over 15 minutes to play, and surely rested in midweek, too.

Jordan Henderson (on for Elliott, 74′) – 5 – Looked lost coming into the midfield battle.

Alex Oxlade-Chamberlain (on for Salah, 90+2′) – N/A – Good to get some more minutes ahead of a likely start in midweek.

There was a bravery from Klopp in sticking with his 4-3-3, but the setup paid off with a more compact midfield and Nunez serving as the out-ball on the left.

Liverpool were deservedly ahead at the break, but the manager could have been more proactive with his changes as the tide turned in Spurs’ favour, with no substitutions until Kane’s goal.

The options weren’t exactly inspiring, so Klopp can’t really be blamed, and now he can look to finally rest some of his key names with almost wholesale changes against Derby in the Carabao Cup.