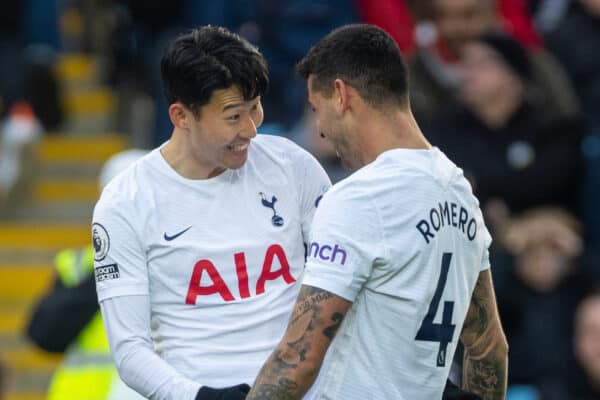 Tottenham faced with 6 injury concerns vs. Liverpool – 3 already ruled out

Tottenham are not without a number of fitness concerns ahead of Liverpool’s visit on Sunday, with three players ruled out and another three in doubt.

The Reds’ final away game before the World Cup break takes them to Tottenham, a side that sit 10 points ahead of Jurgen Klopp‘s men having played one game more.

Sunday’s hosts have experienced an inconsistent campaign, not too dissimilar from Liverpool, and they head into the fixture off the back of securing their place in the last 16 of the Champions League.

But it came at a cost, with Heung-Min Son set for a spell on the sidelines after suffering a fractured eye socket that required surgery on Friday.

Son is not the only player to be absent for Liverpool’s visit, though, as ex-Everton man Richarlison is missing with a muscle injury, as is Cristian Romero.

“Richarlison is not available for the game, same for Romero,” Conte confirmed in his press conference. “Also Sonny now is having surgery.”

They are three players Klopp does not have to concern himself with as he prepares his side for the fixture, but there are three others who might not be fit to start for Spurs.

They are Rodrigo Bentancur, Lucas Moura and Dejan Kulusevski a trio who have all missed games this season with various issues.

Bentancur is the likelier of the trio to be ready but Kulusevski has missed the last ten matches and only just returned to training, while Moura’s first 90 minutes of the season in midweek has not been without issue.

“The problem with Lucas Moura is having different faces for his pain. Today it was really bad and they said he was really worried for this. I asked him to try to be available.”

As for Liverpool, they are to welcome back Jordan Henderson but be without James Milner due to concussion protocol.