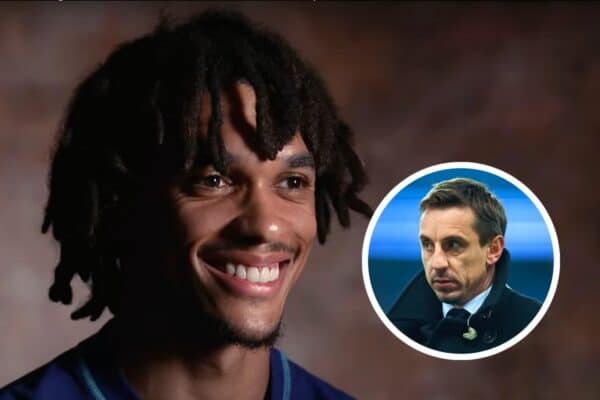 Trent Alexander-Arnold is not short on critics and pre-World Cup Gary Neville doubted Gareth Southgate “will trust him in knockout games,” a bizarre statement considering the No. 66’s experience.

Prior to the World Cup and the announcement that Alexander-Arnold would be in Southgate’s squad, Neville said on Sky Sports:

“He does rash things. In a World Cup, there would have been a penalty against him today and in a second phase or a quarter-final, he’s given a goal away.

“I don’t think Gareth will trust him in a knockout game, which means will he then take him?”

Now, Neville has previously praised Alexander-Arnold and said he can become “the best right-back the world has ever produced,” but his “rash” comments raised some eyebrows.

As for Alexander-Arnold himself, he feels he has “stepped up to the plate” in knockouts for Liverpool, a stage which “brings the best out of me.”

“I can only go off the knockout games I’ve played in,” Trent told ITV Sport when asked about Neville’s comments.

“I think looking back on the ones I’ve played in, the big games, the big moments in football, and I’ve been fortunate to have a lot of them.

“I think I’ve performed and stepped up to the plate very well. I’ve handled that pressure.

“I like to play with that pressure and I think, for me, the bigger games, the ones that mean the most, they’re the ones that bring the best out of me.”

And Jurgen Klopp shared the same view as his right-back in the days following Neville’s comments, “Trent is now 24 and won quite a few finals, important games where you have to defend.”

Three Champions League finals, a Super Cup, a Club World Cup and successful runs to the finals of both the FA Cup and Carabao Cup – all by the age of 24 speaks for itself.

Not to mention lifting the Premier League and the knockout games that came before the abovementioned runs to the final.

At the end of the day, though, the Liverpool manager’s opinion is only one of two “in football right now” that Alexander-Arnold cares about, alongside Southgate as they pick the teams.