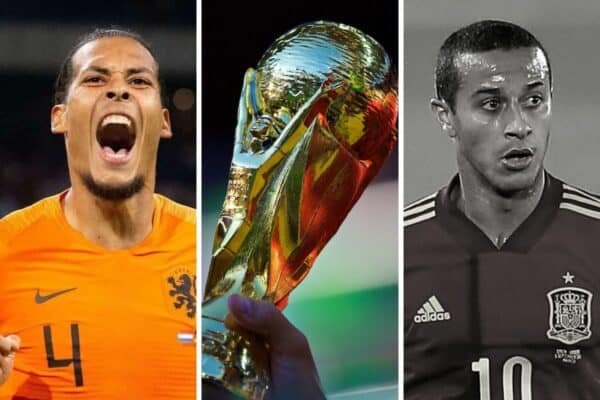 Netherlands and Spain revealed their squads for the World Cup on Friday, with Jurgen Klopp now aware of which Liverpool players will be heading to Qatar later this month.

As expected, Netherlands captain Virgil van Dijk has been included in Louis van Gaal’s 26-man squad, but Thiago has not made the cut for Spain.

In total, there will be seven Liverpool players taking part in the tournament, which gets underway on Sunday, November 20.

That is less than the likes of Man City and Chelsea, who are likely to have around double that amount of players in Qatar.

The other Reds called-up are Brazil’s Alisson and Fabinho, England’s Trent Alexander-Arnold and Jordan Henderson, and Uruguay’s Darwin Nunez.

Thiago and Roberto Firmino will perhaps be the Liverpool players who are most disappointed to not be involved, having featured heavily for Spain and Brazil, respectively, in recent years.

Luis Enrique has opted to select a younger set of midfielders in his Spain squad, with Thiago missing out having only played a bit-part role at Euro 2020.

His most recent call-up came at the end of last season, but despite being one of Liverpool’s more consistent performers this season, he won’t feature in Qatar.

Earlier this week, it was confirmed that Firmino had missed out on Brazil’s final 26, with Tite selecting the likes of Arsenal‘s Gabriel Jesus and Tottenham‘s Richarlison ahead of him.

The Liverpool players who aren’t in Qatar will embark on a mid-season training camp in Dubai, with the Reds to play friendlies against the likes of Lyon and AC Milan before they return to competitive action.

Joe Gomez, Joel Matip, Andy Robertson, Thiago, James Milner, Mohamed Salah, Luis Diaz and Firmino are among the senior players Klopp will have available to him during the break.

This Saturday’s Premier League meeting with Southampton marks the Reds’ final match for almost six weeks, with their first game back a Carabao Cup clash away at Man City in the week commencing December 19.

Despite that being a tough draw on paper, there’s every chance Liverpool will be able to name a stronger side than their opponents, who will still have the vast majority of their squad recovering from their exploits in Qatar.