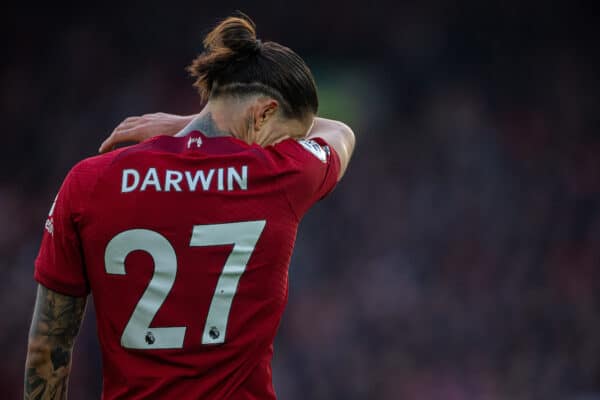 After scoring a brace to guide Liverpool to victory in their final match before the World Cup, Darwin Nunez is continuing to prove his worth, with his team-mates not surprised by his recent good form.

The Uruguay striker endured a difficult start to the campaign, with his sending off against Crystal Palace in Liverpool’s second league game of the season resulting in a three-match ban.

But the ex-Benfica man has played a key role in the Reds’ good form going into the World Cup break, with his goal tally for the season now up to nine.

In the last few matches, Nunez has been deployed in a role on the left side of Liverpool’s attack, and James Milner, for one, has been impressed with the relationship he has struck up with Andy Robertson on that side.

“They’re getting that understanding and it’s great that Darwin is banging those goals in,” Milner told LFCTV after the win against Southampton.

“He has settled in pretty quick, to be fair. He’s still learning the language but he’s getting it, he has got a great sense of humour and obviously we’ll see more of that I’m sure once his English comes out more.

“He has got everything so it’s pleasing for him to get the goals. And Robbo, we know how much he loves an assist as well so it’s important that he keeps getting those.”

Nunez’s impressive performances have come as no surprise to his team-mates, with both Milner and Trent Alexander-Arnold pointing out how the striker has proved his quality on the training pitch.

“Just watching him in training and his attributes, his willingness to work for the team, he is obviously great in the air, a big presence, great strike with both feet, he hits it early, wants to score goals,” Milner continued.

“He is a different type of striker to the other guys up there and that’s obviously great for us as a squad to have these players who all have different attributes.”

“Coming over to the Premier League, with the price tag on his back, was going to be a heavy weight,” the Reds right-back said, as quoted by the Echo.

“It took him a few games to get going but we all saw in training the player he is.

“He’s a proper centre-forward with speed but was playing on the wing today, he’s versatile. We saw what he could do and he’s hit a stride now, he’s enjoying his football.”