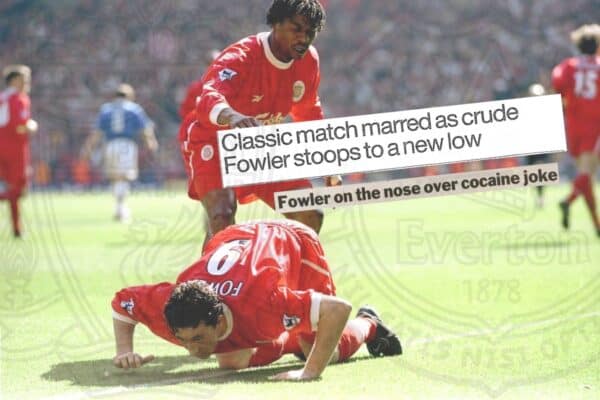 It was 1999, the new millennium was fast approaching, and with it, the collapse of civilisation by the ‘Y2K bug’, so some believed.

In the Liverpool sphere, meanwhile, Gerard Houllier was in sole charge, Steven Gerrard was in the midst of his breakout year and Steve McManaman would soon head for sunny Spain.

Robbie Fowler, though, was in hot water for a controversial goal celebration that led to a four-match ban and a £32,000 fine, the largest dished out to a player at that time.

A heavy price to pay but Fowler does not regret that moment on a warm April’s day in front of the Everton fans at Anfield.

Fowler and the white line

The 1998/99 season did not end with silverware held aloft, far from it, but what it did offer was the rise of a future captain and legend, one who would play a small, but significant, role on this day.

The Reds arrived at Anfield on April 3, 1999, with just one win from their previous seven games in all competitions, languishing in ninth place in the Premier League and had no cups to play for.

Everton‘s visit offered a chance at breaking up the monotony of recent woes, but it did not feel as though it was to pan out that way if the first minute was anything to go by.

Olivier Dacourt was the one to thank for that, scoring for the Blues before the clock had even ticked over into the first minute with a, frankly, impressive strike from outside of the box.

David James was none the wiser.

Blues in the Kop rose to their feet while heads went into hands for Reds. Not for long, though, as Paul Ince won a penalty, Fowler converted and herein kicks off the controversy.

Anfield reached a crescendo as Fowler made his way over to the away end, falling on all fours and sniffing the by-line in response to unconfirmed accusations from Blues that he was a cocaine user.

The Telegraph described the reaction as one that “caused uproar behind the goal and police had to move in to quell furious Everton fans.”

“No chance!” Fowler later told FourFourTwo when asked if he regrets the celebration. “I used to get absolutely mullered by Everton fans, so I was always going to do it.

“I knew what I was doing. I didn’t care. It was a chance to wind them up after all the abuse they’d given me!”

And if Blues were sick of the sight of the No. 9, they had more coming their way when just six minutes later Fowler gave Liverpool the lead with a well-timed header after McManaman’s flick-on.

Patrik Berger scored late, 3-1 to the Reds. “Mission complete” was how the commentators assessed the goal. But Everton were not going to idly walk out of Anfield without offering a fright, scoring through Francis Jeffers just minutes later.

It is then that a budding, fresh-faced 18-year-old Steven Gerrard made his first lasting impact in a Merseyside derby.

Liverpool’s No. 28 threw himself into the path of the ball while the penalty area was in disarray thanks to a rush of blood from David James, denying what looked to be a certain goal for Danny Cadamarteri, in what was a decisive 29-minute cameo off the bench from Gerrard.

The threat of an Everton equaliser was thwarted and with it came Liverpool’s first win in the derby since 1994, coupled with their first three-goal haul against the Blues in 33 years.

It is no wonder then, that when the final whistle arrived, “Houllier leapt from the dug-out and punched the air with two fists in near delirium.”

“We badly needed the win for the fans,” Houllier said after the win. “It was a reward for them. We were more shaky in the last 10 minutes than in the rest of the match, which was silly.

“But I hope this will boost our confidence.”

Just three wins followed in the last nine games of the season – and Fowler would play only the first three after the FA took swift action on his celebration.

In the aftermath of Fowler ‘snorting’ the white line on the pitch, the FA suspended the forward for four games and ordered him to pay a record £32,000 in fines and costs.

A further two games were added to his suspension, taking it up to six to see out the 1998/99 season, after his bust-up with Chelsea‘s Graeme Le Saux during a game a month prior.

Fowler’s legal representative brandished the punishment as “unjust and disproportionate,” but he was made to serve his time, one that denied him the chance of winning the Premier League‘s Golden Boot.

The Englishman signed off on his league season with 14 goals, four less than joint-winners Jimmy Floyd Hasselbaink, Michael Owen and Dwight Yorke.

As for Houllier’s Reds, the win over Everton failed to have a significant ‘boost to confidence’ translate into results, with two draws and two defeats following on from the derby triumph.

The season was not a complete write-off, though, as Gerrard broke onto the scene, laying the foundations for a more involved 1999/00 campaign that ended with Liverpool in fourth and sealing a place in the UEFA Cup.

Eighty days of heaven, that’s what, as Liverpool won the League Cup, FA Cup and UEFA Cup to secure a historic cup treble and end the club’s six-year wait for silverware.