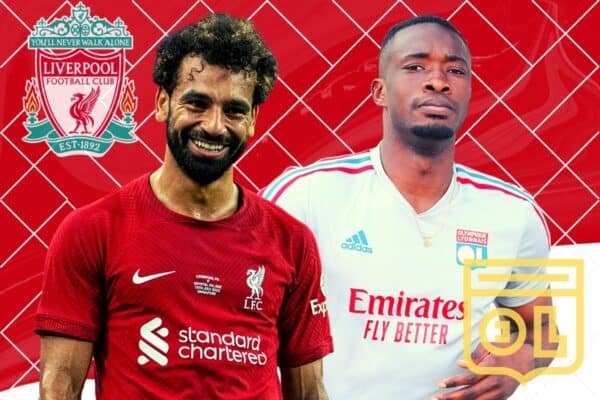 10 key things to know ahead of Liverpool vs. Lyon in Dubai Super Cup

Liverpool play French side Lyon in the Dubai Super Cup on Sunday afternoon – here’s everything you need to know about the winter friendly.

1. It will go to penalties!

No, we’re not predicting a draw between the two sides – in this tournament all four matches will have a penalty shootout after full-time, with the team who wins on penalties receiving an extra point.

If the match is drawn, each side gets two points. With the usual three points for a win.

With such a small number of games in the ‘tournament’, it’s a different way of ensuring a winner.

2. Lyon have already been in action

Strangely, Lyon have already played in this tournament, while the other side, AC Milan, don’t play their first game until next Tuesday.

Lyon lost 3-0 to Arsenal on Thursday night (plus 2-1 on penalties), with Gabriel, Eddie Nketiah and Fabio Vieira scoring for the Londoners.

3. Some familiar names in Lyon squad

One of the familiar faces in the Lyon squad is former Arsenal captain Alexandre Lacazette, who is partnered up front by Moussa Dembele – the former Celtic man who was linked with Liverpool for a time.

Lyon are currently managed by former France World Cup-winning defender Laurent Blanc, who had a brief stint at Man United at the end of his playing career.

Liverpool took 33 players to Dubai for this winter training camp, although not all are fit and Luis Diaz has since departed with a recurrence of his knee injury.

Diaz is definitely ruled out, Curtis Jones is unlikely after training separately in the week and there are doubts over Thiago and Joel Matip, too.

Speaking to the club’s official website ahead of the tie, Jurgen Klopp spoke about using the time in Dubai to emerge “fighting for each inch”:

“It’s really good fun to be together with them, to see them.

“We all want to strike back – that’s the reality. We don’t accept things like this.

“But it’s difficult in a season to change things because you play every three days and if you have a problem then you try to sort it and then you create another problem – that happens very often.

“We came through a difficult spell and now I think we are sixth in the table or whatever – yes, there’s some distance but I don’t know where it will end up but I want to see us fighting for each inch, to be honest.

“That’s what we try to create here.”

All matches in this four-team, four-game tournament are taking place at the 15,000-seater Al-Maktoum Stadium in Dubai, home to local side Al Nasr SC.

It’s a modern stadium, renovated in 2018 after initially being opened in 1995, with a mosque built into one of the stands making it unique.

7. Not our first friendly vs. Lyon

Liverpool have only played Lyon twice in competitive games in their history, both coming in the group stage of the Champions League in 2009/10.

The Reds took a 1-1 draw from Stade de Gerland, before suffering a 2-1 defeat at Anfield as they were knocked out of the group in Rafa Benitez’s final season.

There was, however, a friendly between the two sides during pre-season in 2019, with goals from Roberto Firmino, Harry Wilson and an own goal from Joachim Andersen handing Liverpool a 3-1 victory in Geneva.

8. A chance for youth

Klopp called up a total of 13 academy youngsters to his squad for the trip to Dubai, and some of those will be in line for minutes on Sunday.

Marcelo Pitaluga and Kaide Gordon are not in contention, however, as they recover from long-term injuries.

9. When are the other games in this tournament?

After this one, both Arsenal and Liverpool play against Italian side AC Milan, with the Reds’ match being next Friday (December 16) – timed again to avoid clashing with any World Cup fixtures.

From there, Liverpool will head back to Merseyside and begin preparations for the return to competitive action against Man City on December 22.

The match kicks off at 2pm GMT (6pm local time in the UAE), and is live exclusively on LFCTV.

Jack Sear will be running This Is Anfield’s matchday live blog from 1.15pm, with updates and analysis throughout.

This Is Anfield’s coverage of Liverpool FC in Dubai is brought to you in association with LFCRetail UAE – the Reds’ official retailer in the United Arab Emirates.