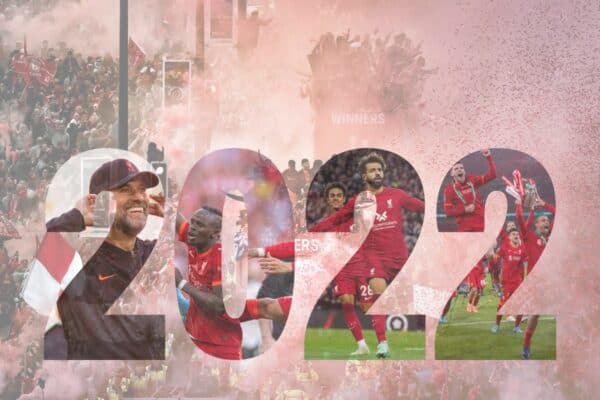 This last year has been nothing short of a rollercoaster ride, from being two wins away from an unprecedented quadruple to starting off the new season on the back foot. Still, what a year 2022 has been.

The year 2022 is nearly in the rearview mirror and 2023 is nearly upon us, and that makes for time to reflect.

Jurgen Klopp‘s side lifted two trophies at Wembley and came agonisingly close to another two as the Reds entertained game after game to take us on the ride of our life.

There were low points, no doubt, but Reds have had plenty to celebrate and moments to savour and will look back on the year fondly.

Here, we’ve taken a trip down memory lane and picked our 10 of our favourite photos from 2022, in no particular order! What a ride it has been…

As ways to announce your arrival go, Darwin Nunez‘s was up there having scored a goal against Man City in the Community Shield – safe to say, he thoroughly enjoyed the moment!

We knew straight away we had a brilliantly mad one on our hands.

The backdrop was the FA Cup final against Chelsea at Wembley and what a sight this was as Anfield South celebrated the first success in the competition since 2006!

Red as far as the eye can see, the only way it should be.

Another prolific year in the books for Mo Salah, all capped off with more records and a new contract until 2025.

He has 25 goals in 2022 and this one against Man City was more than worthy of the celebration!

Talk about transitioning into the side with ease, Luis Diaz hit the ground running after his arrival late in January and was key to the Red’s push for all four trophies.

An inspired signing who represents the next era of Liverpool’s attack. His return in 2023 cannot come soon enough.

Farwell to a legend

This photo sums up two of the most important players in the Klopp era, with Sadio Mane‘s departure felt deeply after six glittering trophy-laden years.

His pace, power, trickery and smile lit up Anfield during his 269 appearances and it was unfortunate Reds were not able to give him the proper sendoff he deserved.

The future is bright

There were five academy debutants in 2022 and Stefan Bajcetic is just one youngster who took his opportunity to shine, leading to plenty of excitement over what is to come next.

After his first goal at Aston Villa he was shown plenty of love from Klopp and his teammates and this image is one the 18-year-old will certainly treasure.

The start of 2022 and the end of the 2021/22 season saw Liverpool play 34 times, in just seven did they not win with that run also including two cup wins and one Champions League final.

This team is built different, and while the end of 2022 has not been as smooth sailing, talent does not disappear overnight and this team will no doubt give us plenty to celebrate in the New Year.

There are so many incredible images from this day that could make up a list of its own, but Joel Matip giving it the big one with the trophy cannot be overlooked.

We got different variations of Klopp’s fist pumps throughout the year and this one at Wembley was right up there!

Liverpool had just knocked Man City out of the FA Cup to reach the final, Klopp was making his way toward the tunnel before James Milner had a word in his ear to give the fans what they wanted.

And, boy, did the manager deliver. The unbridled joy is unmatched.

The power of Liverpool fans never ceases to amaze and it was again the case as an estimated 500,00 fans lined the streets of the city to celebrate the domestic cup double.

Klopp’s words said it all:

“No club in the world, this world, would lose the Champions League final the night before and people arrive here in the shape they are, the mood they are – absolutely outstanding.

Let’s hope we have reason to do it again soon!