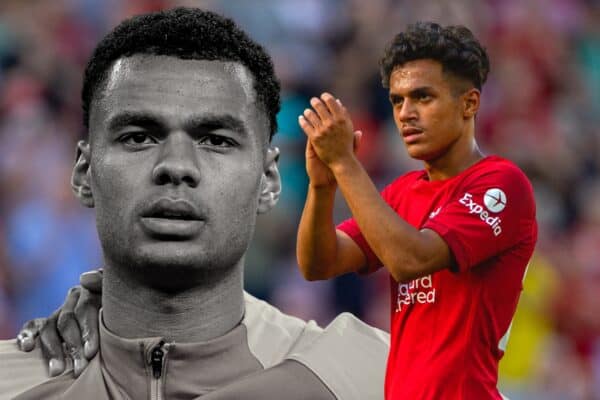 Liverpool will not be able to call upon Cody Gakpo against Leicester on Friday, with Jurgen Klopp set to decide between his left-sided options.

The Reds are due for their 60th and final game of 2022 this week, as they face Brendan Rodgers’ Leicester at Anfield.

A comprehensive victory over Aston Villa on Boxing Day was their third in a row in the Premier League – bookending the World Cup break – and Klopp will be eager to make it four.

His attacking options remain limited, however, despite the £37 million signing of Gakpo from PSV Eindhoven earlier this week.

With Gakpo currently ineligible to feature, a big call is required on the left.

Here is what we know about the Liverpool squad for Friday, including from Klopp’s press conference:

With no immediate new concerns emerging following the 3-1 win at Villa, and four days between games, there is a strong chance the same side is retained.

If that is the case, there may be another opportunity for Alex Oxlade-Chamberlain in the unfamiliar role of left winger:

That would see this Liverpool lineup at Anfield:

However, there is still scope for change, particularly with a tough trip to Brentford – who held Tottenham to a 2-2 draw on Boxing Day – to come just three days later.

That is unlikely to include Konate as a starter, but there are further options to rotate in midfield and attack:

With those two alterations, Liverpool could shape up like this:

Though there are signs of improvement following the break and time spent training in Dubai, this Liverpool side remains a work in progress when it comes to rewriting their form.

But on a promising run, there is a convincing case to argue that Klopp should keep his faith in an unchanged lineup – particularly in the absence of key forwards.

It should be noted, too, that after Leicester and Brentford comes an FA Cup third-round clash with Wolves at Anfield, at which point more rotation can be employed.