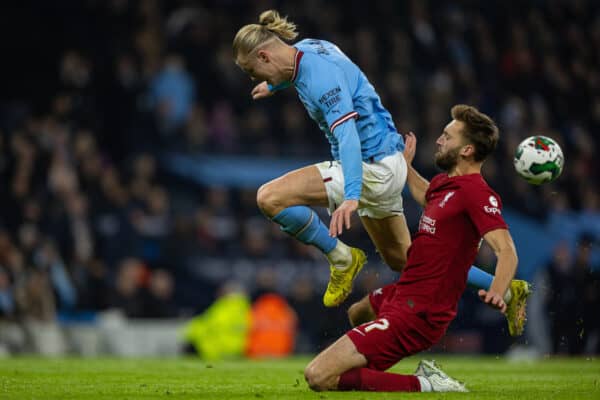 Liverpool returned to competitive action with a decent showing, but suffered a 3-2 defeat in the Carabao Cup at the hands of rivals Man City.

Lest it be forgotten as we prepare to head back into league action, the Brazilian is actually still our top scorer in the Premier League.

Without him there are precisely two senior forwards available, which isn’t ideal for a team playing 4-3-3.

Against City, and perhaps for whichever other games Bobby misses, it meant Fabio Carvalho into the front line.

Positives: obviously he’s excellent on a technical level. He also scored, a well-taken and composed finish. You can never have enough of that, especially in talents for future seasons.

But that’s the point: he’s for future seasons. He’s little more than a schoolkid at the moment and it shows at times, in both physicality and in decision-making.

That was evident in the attempt to take on Kevin De Bruyne outside his own area, in losing the ball for City’s first-half goal, in several other less-impactful, but no less notable, instances where a senior player would have done differently.

It’s not Carvalho’s fault he’s being needed so much, but he isn’t yet ready at the level the Reds need a regular forward to be.

Quartet handed chance, one takes it

It can be argued that six players in this Liverpool XI wouldn’t necessarily be guaranteed starters if everyone was around.

Caoimhin Kelleher and James Milner are not regular starters, but they are what they are and that won’t change: squad options, backups for certain specific roles.

This isn’t quite about them, therefore.

Joe Gomez and Joel Matip paired up in defence, to very different effects. The former was beaten in the first minute for a Haaland chance and then 10 minutes later for a Haaland goal.

Gomez didn’t really get to grips with the situation in his half-hour or so in the middle, before switching out to the right.

Matip, on the other hand, looked largely back to very good form after his injury issues prior to November, and even a shaky outing recently in the friendlies.

He was dominant defensively in his one-on-ones, made loads of aerial clearances and produced one of his trademark winding runs and the cutting-edge pass at the end of it to lead to the Reds’ first equaliser.

Higher upfield, we’ve mentioned Carvalho already – but in midfield, Harvey Elliott has been in and out according to fitness, form and the general ups and downs of young players.

Perhaps it can be argued he had the latter all in 56 minutes here; excellent at times and bypassed at others.

He didn’t do himself any harm, and will still hold the trust of Jurgen Klopp. Of the others, only Matip really pushed his claim for more minutes.

Starting in the No. 6 role was Stefan Bajcetic, an exciting young midfielder with obvious talent, but making just his second appearance in a starting XI.

How did he fare? Pretty poorly, to be fair. He was run off, closed down, passed around and outfought, before being subbed at the break.

Which is kind of how we might have expected it to go. This was not, after all, Derby County – his other start. Nor was it Bournemouth, or even Ajax – both of whom he has come on against.

This was City: the very highest elite of the sport and a series of World Cup-standard players around him.

Ilkay Gundogan, Kevin De Bruyne and Rodri formed part of that revolving ring around him – all started in Qatar within the past few weeks. You don’t suddenly step up to being their equal without lessons being handed to you such as this.

Perhaps of more immediate interest to the Reds was another World Cup starter: Fabinho.

True, he only played once for Brazil from the off, but he played a lot for the Reds before the break and wasn’t very good for most of it.

If there’s one player Klopp absolutely needs to rediscover top form in the push for a top-four finish this season, it’s Fabinho.

We’ll not bother reading too much into his 45 minutes here, but that will definitely start to be the case from Aston Villa onwards.

Darwin had the chances

Out go Liverpool. Without match context, losing 3-2 away to Man City isn’t exactly a dismal result, though both teams will feel they might have scored more.

Most of the Reds’ chances fell the way of Darwin Nunez on the night and it has to be said, he wasn’t exactly in what we might term ‘ABCD mode’ – aerial, bulldozing, clinical Darwin.

No, this was the other side of him – always an outlet, definitely causing chaos, but without the right decision or finishing touch at the end of his runs on too many occasions.

Notably, the one time he got it exactly right was the time he didn’t even shoot – he squared it for Salah to immediately equalise at 2-2.

The rest of the time, his diagonal runs came in off the right flank or the inside-right channel, making it a slightly awkward angle for a right-footed shot across the ‘keeper.

Even so, at least a couple of those chances should have hit the target and at least one surely should have found the back of the net.

Instead, three times he dragged it across and wide, with none really struck too cleanly. Another day he probably blams in all three and the Reds go through.

Onto Boxing Day and a seven-point deficit

Seven points, one game in hand. That’s the story facing Liverpool across the next 24 matches of Premier League football, with both Man United and Tottenham (or Newcastle, not bothered which) needing to be overhauled.

Don’t be in any doubt: Liverpool and Klopp might have wanted to win this game at City in the way they want to win any game they play in, but this wasn’t remotely a priority.

Getting game time, sharpness and minutes in the legs was, in preparation for December 26 and a trip to Villa Park.

That was evident in everything from the tempo of play to the clearly orchestrated arrangement of subs, regardless of game state.

Ox, Fab, Hendo, Keita and Phillips all came on, senior players all getting buildup minutes after injuries or returns to action after internationals. Of the five, Oxlade-Chamberlain was the most impactful.

City were exactly the same. This game was a nice bonus if you won it, but largely irrelevant in the grand scheme if not.

On we go to real matters and there’s no escape from next time out onwards.