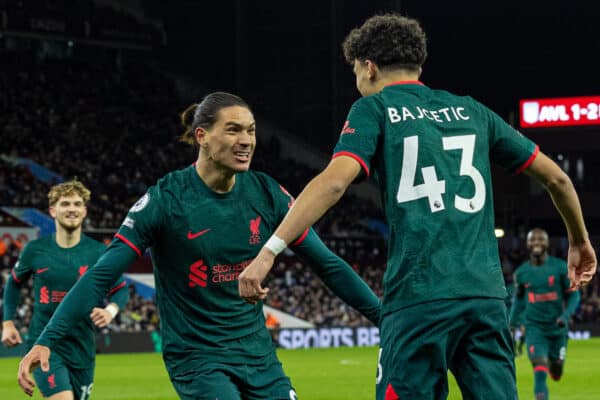 A productive night but Nunez still searches for the outer limits

The false preliminaries of a midweek League Cup trip to Man City over and done with, Boxing Day felt like a genuine return to the business of club football, within the gradually fading slipstream of a winter World Cup.

A third successive Premier League victory, three valuable points gained, a mature and goalscoring cameo made by one teenage star in the making, a league debut for another from the bench, a return to prominence of our playmaking full backs, a commanding central defensive performance from Virgil van Dijk, an understated contribution from an increasingly confident Jordan Henderson, a seemingly rejuvenated Fabinho doing the basics beautifully, Mo Salah delighted to be reunited with a football, and a perplexing mood swing of a display from Darwin Nunez.

Oh yeah, all topped off by what appears to be a sneaky little transfer swoop for Cody Gakpo, right from under the noses of a cluster of fuming rivals at a strikingly bargain fee.

Arguably a story of the ghosts of the past, present, and future when it comes to Jurgen Klopp’s Liverpool, as festivities go this one was a resounding success.

On one hand, we had viewings of Alex Oxlade-Chamberlain, and Naby Keita, neither likely to still be employed at Anfield by the time next season rolls around, while on the other hand, three teenagers climbed from the bench, each of whom could feasibly remain part of the Anfield furniture for a decade or more to come. It all represented a state of limbo for some, and a window on the future for others.

All the while, Liverpool’s contemporary on-pitch giants indulged in a personal game of one-upmanship, as repeated balls were sprayed around the Villa Park pitch in all manner of esoteric directions and distances.

The hosts might have had their moments here and there, and they certainly applied some unwelcome pressure during the first 15 to 20 minutes or so of the second half, but for large swathes of the evening it was just a case of Klopp’s players enjoying themselves.

From here, momentum will be the key. That is easier said than done, however, and given Nunez’s input continues to offer a peculiar combination of all and nothing, and we will see little of Diogo Jota and Luis Diaz this side of February and March respectively, it makes Klopp’s decisiveness in moving for Gakpo maybe less shocking as it first seems. Especially as Roberto Firmino is just days away from being free to agree terms with potential suitors with regards walking away from the club in the summer should he see fit to do so.

At Villa Park, it was a record-breaking, equalling, and bothering night of it for Liverpool. Andy Robertson became the Premier League defender with the highest number of assists, Salah reached the same number of goals in a Liverpool shirt as Kenny Dalglish, and Stefan Bajcetic became the second youngest Spanish player to score a Premier League goal.

What was startling about Bajcetic’s goal was the composure he showed. The expected impulse reaction for an inexperienced player would have been for him to swing his boot through the ball as soon as it arrived at his feet, yet he was intelligent enough to instead draw it across himself from right to left, taking both Robin Olsen and Ezri Konsa out of the equation, before confidently finding the target.

It was a manoeuvre that you’d expect from a player at the peak of his powers, after many years of learned experiences and mistakes. On the touchline the look on the faces of Klopp and Thiago said it all, and the Liverpool manager declared it to be a classic Christmas story, a kind of It’s a Wonderful Life moment, as opposed to the traditional Eastenders misery fest they endure over at Goodison.

For a team that is badly in need of midfield restructuring, the emergence of Bajcetic to compliment the rise of Harvey Elliott offers a little reassurance and a bit of elbow room when it comes to potential summer recruitments. With Henderson, Fabinho, and Thiago still capable players, Liverpool will be able to be a bit more selective in their shopping.

For Klopp and his team, the form of the members of his squad that have returned from Qatar will be as important as the January transfer window and the staggered return to fitness of those on the injury list.

Alisson, Van Dijk, Henderson, and Fabinho all struck intermittent masterful auras against Aston Villa, while Trent Alexander-Arnold opted for a display of the type of vision that England will always be too timid to utilise when on their way to failing to win yet another major international tournament.

Nunez remains the conundrum though. Always in the thick of it, all too often squandering chances, but levelling that out with pulling off the impossible. The part he played in Bajcetic’s goal was magnificent, as was his confidence in trying to volley home a ball that was dropping from upon high, yet he should have walked away from the game with a couple of goals.

With Nunez, you always get the feeling that there is a team out there that is going to take a hiding from him, yet as summer turned to autumn, and then winter rolled into view, we now stand 90 minutes of football away from the new year still awaiting sightings of the outer limits of his potential, as opposed to just the tip of the iceberg.

Leicester City and Brendan Rodgers are now the next target in line, and their capitulation against Newcastle United suggests opportunities will come Nunez’s way once again. Whether he can dispatch them though is wide open to question.